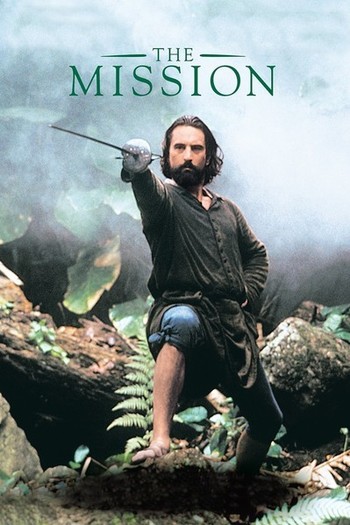 "Your Holiness, I write to you in this year of Our Lord 1758 from the southern continent of the Americas, from the town of Asunción, in the Province of La Plata, two weeks march from the great mission of San Miguel. These missions have provided a refuge for the Indians against the worst depredations of the settlers and have earned much resentment because of it. The noble souls of these Indians incline towards music. Indeed, many a violin played in the academies of Rome itself has been made by their nimble and gifted hands. It was from these missions the Jesuit fathers carried the word of God to the high and undiscovered plateau to those Indians still existing in their natural state, and received in return martyrdom."
— Cardinal Altamirano
Advertisement:

Jesuit priest Father Gabriel (Irons) goes to South America for missionary work, hoping to convert some natives to Christianity. He builds a mission (hence the name of the movie), and is joined by Rodrigo Mendoza (De Niro), a former slave trader seeking redemption.

When the Spanish government sells the territory to Portugal, the Portuguese government wants to capture the natives for slave labor. Mendoza and Gabriel oppose this and resolve to defend the mission, though disagree on how to accomplish the task.

Not to be confused for the English Post-Punk band (see the Music tab for them). Or the Hong Kong movie from 1999.