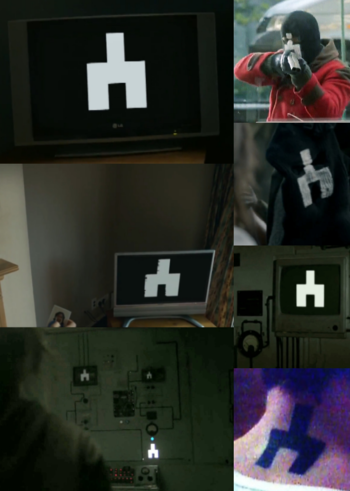 "There was a signal... like pictures, flashing pictures. They just appeared on every TV, every computer, anything with a screen."

The symbolic equivalent of Arc Words or an Arc Number. A picture or symbol appears multiple times and places over the course of a Story Arc. No explanation is given for the symbol until well after the eagle-eyed fans have noticed it and started debating its meaning. These often either serve as Foreshadowing, or tie into the theme of the story.

Note that this is distinct from Sigil Spam, which is about organizations who put their symbol on everything they possibly can. But it is possible for the two tropes to overlap: If a symbol that has been appearing everywhere since the first episode is revealed in the season finale to be the symbol of the Ancient Conspiracy that secretly rules the world, then it's an Arc Symbol and Sigil Spam.