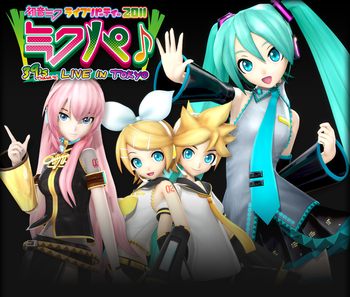 Luka, Rin, Len and Miku...we couldn't fit them all in if we tried.note And, trust us, we did.
Advertisement:

Vocaloid (portmanteau of "vocal" and "android"; stylized as VOCALOID) is a singing voice synthesizing software created by university researcher Kenmochi Hideki and the Yamaha Corporation. Initially starting life as a science project in 2000, Yamaha developed the experiment into a commercial product, releasing it to the public on January 15, 2004. Functionally, Vocaloid works like a combination of Synthetic Voice Actor and Auto-Tune. To use a Vocaloid, one simply has to load a voice bank (sold separately from the main software and produced by different companies), type in the lyrics of the song of their choosing, and tune the melody for said song, producing a fully synthesized singing voice (though a great deal of fine-tuning is usually necessary to have the result sound natural).

If that was all that Vocaloid was, then it would have been a perfectly functional software useful in music creation with little else to say about it. But Vocaloid is far more than just that; what really made Vocaloid special was its voice banks, nicknamed Vocaloids, who are characterized as their own individual singers with their own, usually anime-styled, official character designs.

It is these singer Digital Avatars that made Vocaloid more than just a software; the Vocaloid characters have gathered massive followings in Japannote The earliest Vocaloids with no official character design are significantly less popular than the ones with character designs, with flagship Vocaloid Hatsune Miku becoming an outright Virtual Celebrity. These Vocaloid characters were incorporated into Vocaloid-using music videos, have their characterizations expanded in fan works, or even rendered into 3D and projected on stages for live concert "performances".

Vocaloids are predominantly Japanese-speaking, but there are also many English, Chinese, and Korean vocaloids. There are currently five generations of the Vocaloid software with over 70 vocaloids across the generations. Vocaloid also has a speech-synthesizing-only sister program called VOICEROID, and features both voice banks ported from Vocaloid and its own original voice banks.note And despite being purely a text-to-speech program with no musical functions, some artists have managed to successfully create songs using VOICEROID.

Vocaloid music, the majority being independently produced and released on the internet, have found a respectable amount of internet but also mainstream success in Japan, with some producers' Vocaloid music albums climbing reasonably high in the Japanese music charts. A number of Vocaloid songs have also managed to evolve into their own multimedia franchises, with examples including Black★Rock Shooter, Kagerou Project, Confession Executive Committee, and Mikagura School Suite. Even Chinese Vocaloids have managed to secure their own little space in China, and have had their own concerts.

The Vocaloid subculture is known for its close relationship with the utaite subculture, who are vocalists that produce cover songs of anime, video game, and Vocaloid songs on the internet. The independent nature of Vocaloid songs made them readily available for cover songs, while their non-human vocals created interest for Vocaloid songs with human vocals. Many Vocaloid procuers are in fact also utaite themselves.

Note: The following is only for tropes related to official Vocaloid material. For tropes on songs, fanon, and other fan works, go here. For those looking for more info on Hatsune Miku, go here.