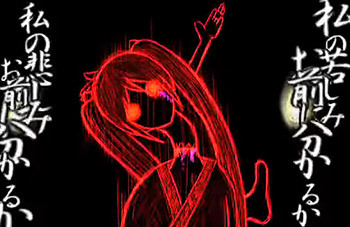 Since Vocaloid is pretty much a blank slate for whatever the composer decides to make, many of them can turn out differently than the next. These composers and songs just... decided to try and scare you. Fortunately for them note and unfortunately for us, these songs did.

Nightmare Fuel pages are Spoilers Off. As such, all spoilers are unmarked. Read at your own risk.

open/close all folders
Deino
While Deino (AKA Deino3330) is more of an artist than a producer, he does have a Youtube channel. And his videos are made in the same Surreal Horror style than the works on his Deviantart gallery, as the examples below clearly show...
Healing-P
Advertisement:
Hitoshizuku-P
Kikuo
Machigerita-P
...You know, let's just say most of the songs by Machigerita-P (except for a couple of surprisingly cute songs he created for Miku) are made to scare you. And horribly scare you they do.
Masa Works Design
mothy/Akuno-P
mothy (master of the heavenly yard) had gotten a reputation from the Evillious Chronicles; it has its own "wiki"

, and most of his songs end with someone being murdered or worse... Has its own page here.
Advertisement:
Utsu-P
Others