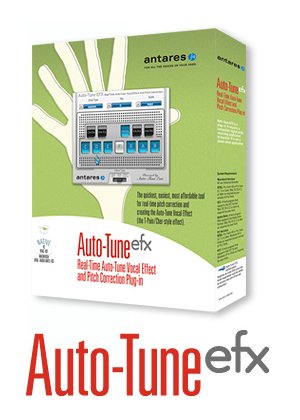 "That's Auto-Tune, son! It lets you sing... even if you can't sing!"
— Thugnificent, The Boondocks, "Bitches to Rags"
Advertisement:

Auto-Tune is a pitch correction software suite offered by Antares Audio Technologies. While neither the only software of its kind on the market nor the first method of pitch correction, its high flexibility and ease of use quickly shot it to such prominence that it may qualify as a Brand Name Takeover.

Auto-Tune was conceived in the mid-nineties not by an audio engineer, but a seismic analyst working for Exxon named Andy Hildebrand. When asked at a party if he could use his software to modify a singer's pitch, he developed Auto-Tune. The first version of the software was released in 1997.

Auto-Tune was originally intended as a way to correct notes sung flat or sharp by less than a semi-tone, but it was discovered to create a robotic sound when driven much further and combined with abrupt pitch shifts. The first (successful) usage of this style was on the 1999 #1 Cher single "Believe", but because this method was kept as a trade secret at the time, it took a couple years for other artists such as Daft Punk to discover it.

The act of distorting vocals for a robotic effect is not new in and of itself, having been used since the 1970s with the vocoder

, but this was mostly relegated to funk and electronica, both niche markets. Using Auto-Tune for a similar effect didn't become prominent until the arrival of T-Pain in 2005. Unlike other artists that relegated it to subtle uses or genres aiming for a digitalized sound, T-Pain used it obviously and flagrantly on nearly all of his releases. His huge success led to a slew of imitators within pop, R&B, and hip-hop. Within a very short period, Auto-Tune distortion became the norm rather than the exception.

With the wide adoption of Auto-Tune, the technique quickly became a source of controversy both within and in discussion about the music industry. The major criticism is how the program strips all the personality and subtle harmonics from a performer's voice, leaving those who utilize it sounding near-identical with each other. This ties in with the criticism that it is inherently lazy and dishonest: because the software ensures perfect pitch, the actual capabilities of the singer are a moot point. These arguments exclude artists who use it primarily to distort their voices into the aforementioned robotic sound, but they catch their own flak for their (perceived) unoriginality. Auto-Tune is such a source of backlash that in many circles, it's actually used as a general insult against singers regardless of context.

Still, with the majority of the best-selling singles and albums utilizing the method, it's unlikely to fade away any time soon.

See also the Loudness War, the other major controversy within the music industry.

Please remember that Tropes Are Tools and not to use this as a Take That! page.

Examples of artists, albums, and songs using Auto-Tune as a method of distortion include:

Examples of Auto-Tune as a topic of discussion and within contexts other than music include:

Nigel shows off his ability to mimic auto-tune during his audition while singing the song I Will Survive.

Nigel shows off his ability to mimic auto-tune during his audition while singing the song I Will Survive.