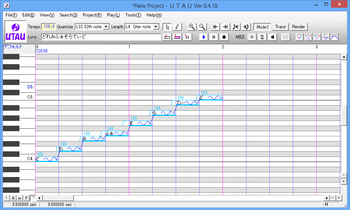 UTAU is a musical voice synthesis program created by Ameya as a freeware response to Vocaloid. Using UTAU is much like using Vocaloid, however there are some differences in usage (which may lead to Damn You, Muscle Memory!). Also, UTAU has the feature of importing vocal samples manually, which allows a person to use their own voice in UTAU.

Before the appearance of the now popular Teto Kasane, UTAU was virtually unknown. To date, there are over 1500 UTAU voicebanks from all over the world.

Near the end of 2009, Ameya created a special voicebank recording style first known as renzokuon, or "continuous sound", also widely called VCV (vowel-consonant-vowel). This allowed UTAU voicebanks to sound much smoother and more human than before. Another recording style a few years after that, referred to as CV-VC (consonant-vowel-vowel-consonant), quickly became popular due to allowing one to create voicebanks for different languages other than Japanese in the program. (Like, for example, english) A Mac version of UTAU, known as UTAU-Synth, has now been released, and a mobile version of the software is in the works.

Advertisement:
A detailed explanation of each recording style for those who care

Since all UTAU are essentially OCs, opinions may be conflicting as to how fitting a trope may be. Edit with caution.