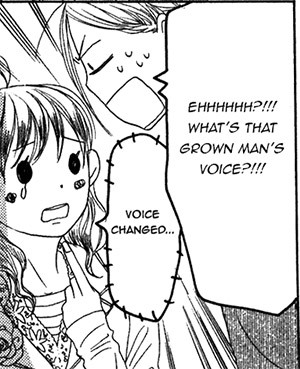 "The first rule of thumb for all radio personalities is to look absolutely nothing like how they sound."
— Strong Bad, Strong Bad Email #120 "radio"
Advertisement:

While it may be wrong to judge a book by its cover, it's something that happens. You see a person, you expect certain things. This extends even to that person’s voice. If you see a muscular man, you expect a deep macho voice. The Vamp will have a sexy, sultry voice. A child's voice is high-pitched. And so on. This trope is about when those expectations don't match up; e.g., when the muscular man has the sultry voice, The Vamp has a childish voice, and the child has a deep voice.

This trope is generally played for comedy since the idea of a squeaky voice from a big person or a deep voice from a small person is generally seen as absurd. For better or for worse, this can sometimes come about by chance, depending on how casting in a voiced work goes. Of course, after a bit, you'll have trouble hearing that character with any other kind of voice except their own.

Cute, but Cacophonic is a subtrope of this, specifically referring to when "an extremely cute and/or tiny animal turns out to have a surprisingly loud cry." Instant Soprano, another subtrope, occurs when this trope arises in response to a Groin Attack. This trope also could be the result of an Inopportune Voice Cracking. Often overlaps with Most Writers Are Adults when young children in animation are depicted with somewhat deep, adult-like voices. Not to be confused with Larynx Dissonance, which involves an actor attempting to impersonate their opposite gender, or Lyrical Dissonance, which involves song lyrics. If a character who didn't initially have this suddenly does, it can lead to Voice Change Surprise.

Man With a Little Girl's Voice

Ashamed of his high-pitched voice, Flapjack finds solace in a most unlikely person... until he meets the rest of his family.

Man With a Little Girl's Voice

Ashamed of his high-pitched voice, Flapjack finds solace in a most unlikely person... until he meets the rest of his family.