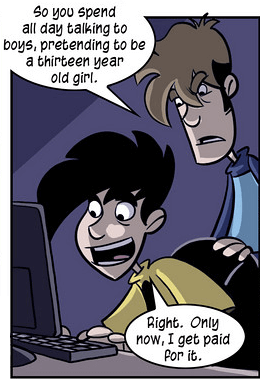 "I'm serious. She could actually be a 300-pound dude who lives in his momma's basement in suburban Detroit. And her name is Chuck."
— Aech,note Ironically, Aech "himself" is actually a girl offline Ready Player One
Advertisement:

Acronym for "Guy In Real Life."

Based on the belief that There Are No Girls on the Internet. Some forums, particularly male-dominated ones, will be the victim of a special breed of Troll who will pretend to be a girl just to rile up the boy nerds in the community. They display obvious Cam Whore traits and may even steal photos of attractive girls off MySpace or Facebook and claim that they are them.

In other cases they may copy photos of their sisters/daughters/nieces/female cousins off photo CDs or the like, especially if said females are of or close to the age of the online persona.

For gaming otherwise, it's also common for video games featuring Character Customization and fancy clothes to have fashion enthusiasts creating and playing as opposite sex characters for aesthetical purpose. See Third-Person Seductress for more details.

Female forum goers have a tendency to get a lot more attention, just by being girls, so many male attention whores use this to their advantage so that they get the attention they crave. They will play and flirt with the male members who may become tickled pink that a girl is talking to them this way. Sad, but true. In the case of online video games, particularly MMOs, this may be done with the intention of wringing free in-game money and/or rare items out of desperate, lonely male players who are only too happy to fork over such gifts as Favors for the Sexy.

Will ultimately lead to The Reveal where they show their true colors as blokes and laugh at the incensed regulars. Or a regular will wise up to his shenanigans and unmask him, causing everyone to point and laugh at him as he slinks away with his tail between his legs. Could also be a practical joke played by a regular to which everyone will simply have a good laugh. Most cases tend to end in the second case, which brings up the question of why such trolls even bother doing it since the risk of being exposed far outweighs the potential gain. Note that not everyone who's biologically male and presents as female online is trolling; see Cross Player, Transgender.

Naturally, any mention of online dating in the old media will end this way, whether played for laughs or for drama, because everyone knows the internet is solely the domain of perverts.

If you think this is bad, though, be grateful your Unseen Pen Pal isn't an evil supernatural being.

In the end though, it all leads to actual women on the Internet using male or neutral user names and fudging personal details specifically to avoid this trope. Or to mess with people.

This is often inverted on many female dominated forums, such as LiveJournal, where the default identity of new posters is assumed to be female and a guy who acts normally but doesn't explicitly mention he is a guy can go for a long time without anyone asking or realising, leading to "You're a guy?!" moments 6 months down the line.

Largely on the way to becoming a Discredited Trope, as the internet becoming more accessible in the 2000s and the rise of social media in the 2010s has made it much more likely that the person online is the actual gender they claim to be. Not to mention the rise of awareness of Transgender people from the 2010s as well, which has made accusing people of this trope much more likely that you'll be the one being ridiculed/called out for being transphobic.

Due to technical reasons, "Girl" redirects to this trope. See Always Female for women-exclusive tropes or Girly Girl if you were confused.