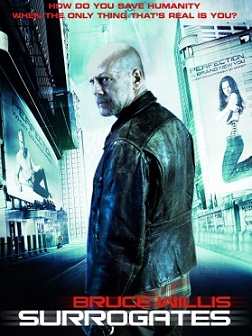 Surrogates is a 2009 film by Jonathan Mostow and based on the comic The Surrogates. Features Bruce Willis, Rosamund Pike, Ving Rhames, and James Cromwell.

Set 20 Minutes into the Future (2017), Surrogates gives us a world where everybody (or at least the USA) lives through robotic puppets known as Surrogates. The appeal of this lifestyle is obvious from the outset: Freedom to live life the way you want, looking how you want, without the downsides of pain and death. Not everyone agrees with this, as there is a movement, led by a mysterious and charismatic man known only as "The Prophet", that is opposed to surrogacy and considers it to be a perversion of human interaction, but for most of society, surrogacy provides guaranteed safety.

That is, until FBI Agent Tom Greer comes across a victim somehow killed through their Surrogate.

Given how large a role Surrogates play in people's lives, Greer expectantly meets heavy resistance to the notion someone is able to target people through their mechanical avatars. And as it becomes more clear that there is someone attempting to destroy this way of life, Tom soon finds himself outside the safety of his machine body, and forced into the real world... and in the process, he begins to question the society's way of life and how fulfilling it really is.

The film primarily deals with identity problems and warns against the use of crutches for those who don't need them.