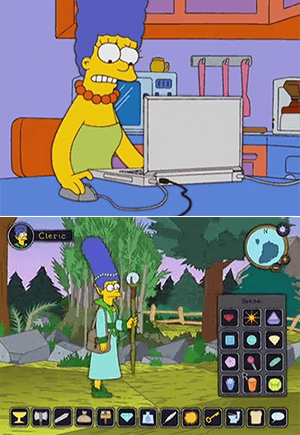 Fat Neil: So you guys suddenly wanted to play Dungeons & Dragons?
Troy: Yeah. Why wouldn't we? [the study group joins in with affirmations] It's cool. And when you play it, it makes you happy, like a dragon.
— Community, "Advanced Dungeons and Dragons"
Advertisement:

The characters act in an episode emulating a role-playing game, either mirroring a tabletop game or Western RPG, JRPG, or MMORPG. Either they're playing as in-game characters, having some imaginative dream sequence, or the normal Medieval European Fantasy sequence gets derailed by it. Due to the popularity of specific forms of RPG in certain regions, it's common to see Western media referencing Dungeons & Dragons or World of Warcraft, Eastern media referencing Ragnarok Online, and Japanese media referencing Dragon Quest. That said, it's more than possible to see references to any type of RPG, no matter the work's country of origin, and some creators are more than willing to shout-out more obscure games.

Note that this is different from shows that are adapted from an RPG (that's The Anime of the Game, which is also inclusive of Western examples such as the Dungeons & Dragons (1983) cartoon), or works that revolve around a Fictional Video Game like .hack or Sword Art Online.

An RPG Episode will almost always be Deep-Immersion Gaming, and if it's an MMORPG one, will inevitably introduce us to UltimateGamer386 (be they a main character or the episode's antagonist).