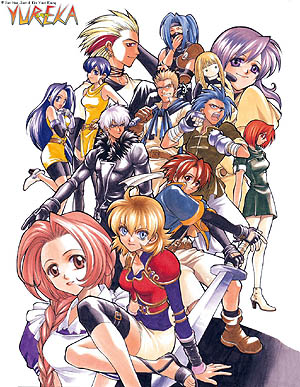 "An eye for an eye, a tooth for a tooth, and pain for pain. I'll pay back my debts, with interest of course."
— Lotto
Advertisement:

In real life, Lotto, Boromid and Ah-Dol are average kids with average problems, but in the virtual world of Lost Saga (not that one), they're heroes. They might even become legends... if they can stop bickering long enough to level up. Whether it's werewolves running rampant or a gorgeous pair of troublesome thieves, our boys must be ready for anything, because in Lost Saga, nothing is what it seems to be and murder can happen with a click of a mouse.

In addition to MMORPG, fantasy, and game programming references, the manhwa is also about What Measure Is a Non-Human? with respect to the NPCs that make the game possible.

Written by Son Hee-joon and drawn by Kim Youn-kyung, it was published in English by TokyoPop as iD_eNTITY (유레카) until the company dropped it, but it is still being published by Madman Entertainment in Australia and New Zealand.