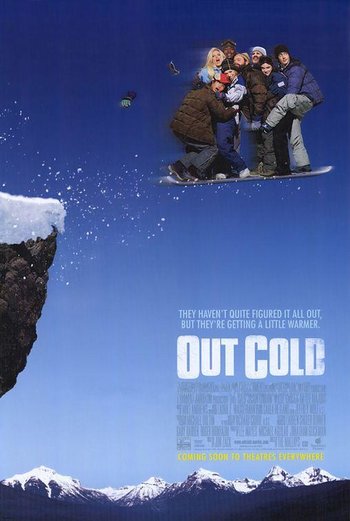 Out Cold is a 2001 comedy film directed by Brendan and Emmett Malloy (credited as "The Malloys"), who are best-known for directing music videos. The film is an extended homage to the classic film Casablanca, and a parody of 1980s ski movies.

The story takes place at Bull Mountain, a down-market ski resort in Alaska, and home to a variety of colorful characters. One particular group of these characters is led by Rick Rambis, a symbol of the local culture and an accomplished amateur snowboarder. Upon the death of owner and founder Herbert "Papa" Muntz, his son Ted Muntz inherits ownership of the resort. Having neither the desire nor the wherewithal to run the resort himself, Muntz resolves to sell the business, in spite of his father's wishes for the resort to be run the way he did, with Rambis as his chosen successor.

Muntz introduces his buyer John Majors, a cut-throat businessman and owner of an international chain of ski resorts. Wanting desperately to seal the deal, Muntz agrees to numerous changes that Majors believes his investors will want to see. These include the introduction of uniforms, and an overhaul of the facilities to be more classy, modern, and trendy.

As it becomes clear that the resort Majors is building will bear little resemblance to the Bull Mountain that Rambis knows and loves, he's faced with the choice of managing the mountain the way Majors would have it managed, or quitting in order to defend Papa Muntz's vision and the lifestyle that he and his friends have forged for themselves.

Complicating matters for Rambis is the return of Anna, a French girl with whom Rambis fell in love while vacationing in Cancun, who, as it turns out, is Majors' daughter. He must choose between wooing Anna away from her fiance, and his budding romance with Jenny, a local girl who has been trying for months to get his attention.

Although the film was disliked by critics and was not a box office success, it has become something of a Cult Classic in the years since its release, with fans of the film considering it to be one of the best comedies of 2001. It is also popular in the snowboarding community.

Out Cold provides examples of: