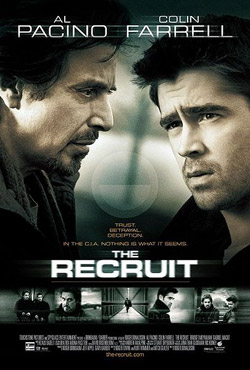 A 2003 spy thriller starring Colin Farrell as James Clayton, an MIT computer whiz, and Al Pacino as Walter Burke, a CIA operative who recruits James and becomes his instructor at The Farm, the CIA's field agent training facility. James seemingly washes out of the program after finally cracking during a kidnapping and interrogation "exercise" (which he had, as intended, believed was real) when the interrogators play on his feelings for fellow trainee Layla Moore (Bridget Moynahan). After James has left The Farm, however, Burke reveals to him that his washing out was a cover created to allow him to take a low level CIA job and help Burke ferret out a mole within the Agency who is trying to steal the top-secret computer virus program Ice-9... and the mole just might be Layla.