Making Love in All the Wrong Places 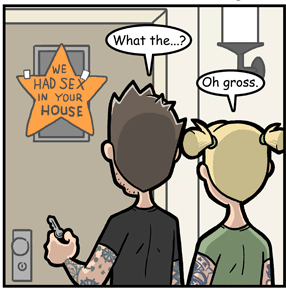 Not what you want to see when you get home.
"I'll be honest with you: I don't think they'll let us have sex inside George Washington's nose at Mount Rushmore. But it's a very evocative image."
— Penelope, Questionable Content, #1434

Traditionally, most people tend to have sex in bed. It's comfy, you're usually already undressed and you can go straight to sleep afterward. Chairs and sofas are also popular; they're soft and have the bonus that the person on top can put more of their weight on the frame. However, some people, for a multitude of different reasons, like to venture further afield for their intimate moments. All over the house, in front of the house, on top of the house, someone else's house, in every gas station, warehouse, farmhouse, henhouse, outhouse, and doghouse in this area (and every highway checkpoint within ten miles), in the pool, on a plane, in a hotel, in a motel, in a restaurant, in a movie theater, on an elevator, in a bathroom, in a basement, in an attic, at the beach, in the sea, in the road, in the middle of a field, in the middle of the Super Bowl Halftime show, in the woods or hills, IN SPACE!, in a car, in a boat, with a goat, in the rain, in the dark, on a train, in a restaurant, in a sushi bar, in a high school bus, in the back of your mama's car, on a trampoline, in the middle of a putting green, in a tree, in a box, with a fox, in a house, with a mouse, here or there, say, they would do it anywhere!

Maybe they think that the old bed is too boring, maybe they don't have a convenient bed and have to do it where they can, maybe they're just so eager to get started that they get down to business wherever they find themselves. Maybe it's their way of getting back to nature. Of course, one of the other advantages of bedrooms that might not be afforded by alternative locations is privacy, but that's OK. It could be the thrill of the risk of getting caught that makes it special. Or maybe it's not just the risk, maybe they like being watched. Then again, maybe they just didn't think things through and end up as Naked People Trapped Outside (or in the emergency room). And sexy teens having sex in the back of their car are known to attract hook-handed serial killers.

Not to be confused with Looking for Love in All the Wrong Places, certainly. Unless the person who does that likes having sex outside, then yeah.

Overcome with Desire is a sister trope, about couples having sex without regard to the consequences of doing so, and they frequently overlap.

are some reasons not to do it absolutely anywhere.

Peter and Lois decide to have sex in Peter's office in front of Opie and an open door. Lois wants people to watch them.

Peter and Lois decide to have sex in Peter's office in front of Opie and an open door. Lois wants people to watch them.