Visual Novel / The Devil on G-String 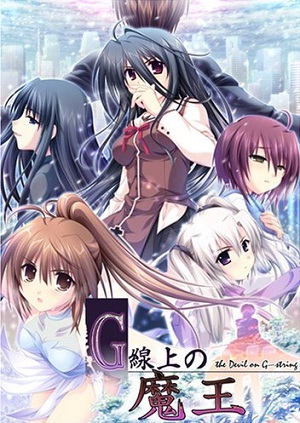 "Come, lovely child! Oh come thou with me! For many a game I will play there with thee!"
Advertisement:

A Visual Novel / H-Game from the creators of Sharin no Kuni. It is also known by its official English title "The Devil on G-String". Contrary to what one may think, the G-String in the title refers to August Wilhelmj's "Air on the G-String", an adaptation of Johann Sebastian Bach's "Air". The "Devil" or "Maou" refers to Franz Schubert's lied of Johann Wolfgang von Goethe's ballad "Der Erlkönig".

Azai Kyousuke is the son of an infamous Yakuza tyrant in the underworld. By day, he is an Ordinary High-School Student who lives like a mildly eccentric playboy, but at night, he is a ruthless financing tyrant working under his father's underworld business.

Things take on a bit of a turn when a girl named Usami Haru transfers into his school - a weird girl with an impossibly long, tangled head of hair who happens to take an interest in Kyousuke. Almost immediately after Haru appears, an international mafia overlord who calls himself "Maou" also arrives in the city, and is set on crushing Haru and everyone else who is connected to her. Haru, meanwhile, is determined to defeat this mysterious figure and inevitably wraps Kyousuke and his friends into the situation.

Maou then starts up a deadly game of hide-and-seek against Haru and her friends, raising the stakes involved for the protagonists with each move that he makes. Kyousuke and Haru are forced to race against time before each of Maou's criminal plans are set into action.

Recieved a censored release on Steam on November 5, 2015