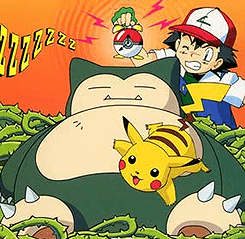 Snorlax, the Sleeping Pokemon.
"Please don't wake me
No, don't shake me
Leave me where I am
I'm only sleeping."
— The Beatles, "I'm Only Sleeping"
Advertisement:

The character does not so much sleep as fall into a coma for eight or more hours. The alarm clock that could rouse them has yet to be built. Yelling does not wake them. Physical trauma won't even do the job, although sometimes the scent of food will.

This condition may sometimes follow a heavy meal,note The medical phrase for this is "postprandial somnolence" and hence is often applied to the Big Eater. Sometimes it also affects the Cloudcuckoolander, the Manchild or someone who's Brilliant, but Lazy.

To some degree, Truth in Television: see Narcolepsy,

a chronic sleep disorder (a dyssomnia) characterized by overwhelming daytime drowsiness and sudden attacks of sleep.

Also, see Not a Morning Person, where the character does wake up... just not exactly early and easily. A particularly heavy sleeper may have Slept Through the Apocalypse. Characters with this trait sometimes also Fall Asleep Standing Up.

Not even freezing water will wake this little critter.

Not even freezing water will wake this little critter.