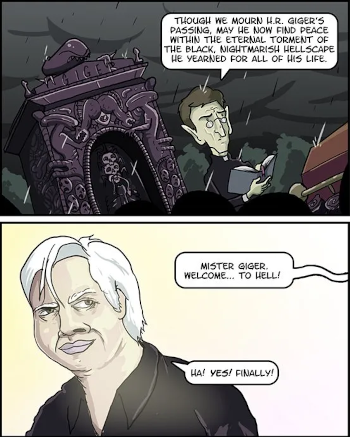 "I have no idea what hell's like. It's a pretty rough place, right? Mean guys everywhere? Hot? I bet it's an ideal place to train. I wanna go there someday... Can you talk to someone, get me in?"
—Goku, Dragon Ball Fighter Z
Advertisement:

A Hell Seeker is a character who is actively trying to get into Hell. Literally Hell, as in the afterlife of endless torment. Maybe he thinks that he will like it there, being allowed to "reign in hell" rather than becoming one of the tormented souls, perhaps thinking that he might even become one of the demons. (Such a character is usually eventually proven wrong, ending up at the bottom of the hellish food-chain.) Maybe he's a hardcore masochist who thinks that an eternity of torture and violation sounds great. Maybe he's concerned he'll otherwise wind up nowhere at all, or vanish entirely. Or maybe he's just trying to punish himself. Or maybe he lives in a setting where Hell is something much cooler than the horrors believed in by certain Real Life religions. It might also be that someone he loves has been damned and he prefers to spend eternity with them or is trying to rescue them. The Blood Knight might view Hell as a kind of Warrior Heaven where he gets to beat up demons all day, especially if Hell Is War. Or maybe, despite all the fire, brimstone, agonizing torture, and "What's New Pussycat?" playing on an endless loop, Heaven is even worse.

A variation of the Hell Seeker tries to find and open the Gates of Hell, but does not plan on actually going inside — instead, he means to release the Legions of Hell, presumably so that they, in gratitude, will do his bidding. Of course, again, Evil Is Not a Toy, and, should he succeed, this variation will probably get eaten by the beasties he releases.

Since most religions forbid suicide, one wonders why these people don't just shoot themselves.

Contrast Heaven Seeker and Escaped from Hell. Also contrast To Hell and Back and Deal with the Devil. The former is for characters who want to go to hell but want to get out afterwards, while the latter is when the character accepts hell after death in return for getting good things in life but not having going to hell as a goal in itself, is likely to try to escape from the deal. This in turn can be contrasted with I'm Going to Hell for This. See also Dystopia Justifies the Means, when they decide to just settle for recreating Hell.

If there happens to be an Easy Road to Hell, so much the better.

Not to be confused with the Hellraiser: Hellseeker, although that movie is an example.