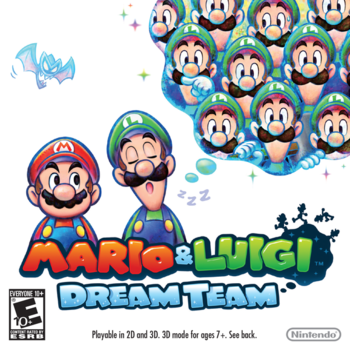 Together in dreams, now in 3D.
Advertisement:

The fourth game in the Mario & Luigi series, and the first to be released on the Nintendo 3DS. Its Japanese name is Mario & Luigi RPG 4: Dream Adventure and its European name is Mario & Luigi: Dream Team Bros. As with New Super Mario Bros. 2, it was announced late in its development and, therefore, closer to its release date (February 2013-Summer 2013).

The game's main gimmick, as opposed to Partners in Time (Time Travel) and Bowser's Inside Story ("Fantastic Voyage" Plot), involves levels in Luigi's dreams. For the first time since Superstar Saga, Mario and Luigi are going on an adventure by themselves (the previous two games paired them up with the Baby Mario Bros. and Bowser, respectively). The catch: for about half of the game, Luigi sleeps, allowing Mario to visit his dreams. Luigi can still manifest within his own dreams to assist his brother, and he can even multiply himself in this case.

Notably, despite the DS' polygonal graphics, this is the first time the style of the games' artwork gets adapted to 3D graphics. This transition is smooth though, so the Polygon Ceiling is thankfully an Averted Trope.

This game include examples of the following tropes:

With his new unfathomable power, Dreamy Bowser sings about creating miracles and melding the world, even calling himself God.

Example of:
A God Am I

With his new unfathomable power, Dreamy Bowser sings about creating miracles and melding the world, even calling himself God.