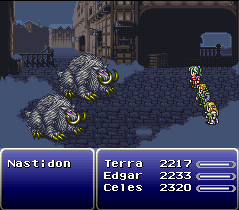 I just wanted to buy some Phoenix Down, man!
"Upon entry of Zozo, the image you had of it quickly abandons you. You expected poor people; you encounter pure madness. Staggering through the buildings are madmen mumbling about minutes, hours, and seconds. The exotic dancers wield arcane spells no human is to possess. Bulking giants attack you, shaking the ground with every 20-ton step. Corpses rot on the street. Towering constructions reach into the sky. And somewhere in this chaos, Terra is waiting for you."
— Djibriel's GameFaqs walkthrough

of Final Fantasy VI, regarding the scene pictured.
Advertisement:

A trope usually seen in RPGs; instead of Bob the Warrior being asked by the villagers to travel to the Evil Tower of Ominousness, eliminate its guard mooks, defeat Emperor Evulz, and rescue Princess Alice, the mooks are in the town, Alice is locked in the city jailhouse, and Bob has to fight his way through the streets and houses to get to her. Logically, however, the town is still a town, so Bob can interact with Apathetic Citizen NPCs and buy things.

Many dungeon towns make use of the Absurdly Spacious Sewer, because most big cities have them in real life, and it's an easy space to throw in some Underground Monkeys without breaking the game's immersion.

Related to Adventure Towns, as both tropes involve the characters having to use their wits or muscles to escape or enter the city, although this trope is generally exclusive to video games.

In some rather large cities, it may actually be explainable as you're wandering around the bad parts of the city and are getting mugged by criminals, or monsters have come into a city (where people don't bother to fight 'em out, condemning that part of the town anyways) and took up residence in the slums.

Contrast Dungeon Shop, where someone has inexplicably decided to open a dry goods store in the middle of the Dark Hall of Anguish and Torment. In some cases, it may also be a Monster Town.

The world having fallen to the Darkness, what remains of Castle Town is a fractured shell of its former self crawling with Heartless.

The world having fallen to the Darkness, what remains of Castle Town is a fractured shell of its former self crawling with Heartless.