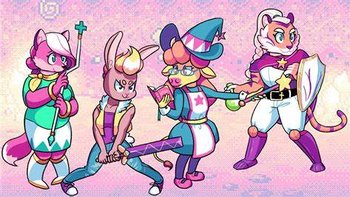 is a turn-based RPG in development by Bobby Schroeder (also known as ponettplus and for the Sonic the Hedgehog (Archie Comics) commentary blog Thanks Ken Penders) using RPG Maker VX Ace. A demo

was released in February 2018 that covers the first dungeon of the game.

Melody Amaranth is a benevolent, transgender, and bisexual red fox who starts training as a paladin to support her new girlfriend, a lesbian, strong, and adventurous desert cottontail punk rocker named Allison Goleta after she decides to become an adventurer. After some lighthearted adventurer business gets out of hand, they and their friends Claire Higsby, a transgender, lesbian, and somewhat reckless Highland cow witch, and Jodie Caldwell, a lesbian Bengal tiger knight, find themselves responsible for the fate of their town.

Was originally a My Little Pony: Friendship Is Magic fangame called Super Lesbian Horse RPG, but has been significantly reworked and expanded.