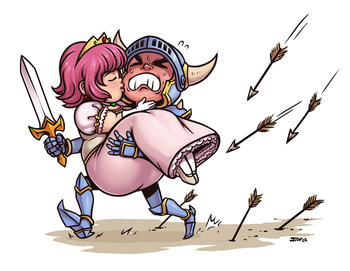 . Used with permission.
"There's something terribly retro about all this, besides the fact that you're saving your kidnapped girlfriend, which as game stories go is only slightly newer than 'you have to shoot the thing.'"
— Zero Punctuation on Shadows of the Damned
Advertisement:

The defining Excuse Plot of the 8-bit era. A Damsel in Distress (whether it be the princess, your girlfriend, whatever) has been kidnapped and put in a tower, and you (and you alone, unless it's a 2-player game) must fight your way through a veritable army of evil minions, dodge horrific death traps, etc. to save her from the Big Bad. Your only reward is probably going to be a Smooch of Victory, unless you get the Standard Hero Reward. Hope she's worth it!

Your Princess Is in Another Castle! can also be a part of these games. Occasionally, the damsel might not be genuinely innocent. Once in a rare while, the villain will decide to Hypnotize the Captive and marry her.

The trope derives from the ancient concept of "Princess and Dragon", where The Hero must save a woman from an invading monster. This is usually used as a metaphor for real-life conflict.

Sometime after the arcade era, it became a Dead Horse Trope. While video games still feature the occasional princess in peril, rescuing them is only part of the overall plot; either that, or it's covered by the Grandfather Clause. In his book Power-Up: How Japanese Video Games Gave the World an Extra Life, Chris Kohler credits this progress to some Girl Gamers who wrote to Nintendo in The '80s to say they were tired of saving princesses; Nintendo eventually announced they'd stop using it as a final goal except in the Super Mario series. The trope's inversion, Princess Protagonist, where the princess is the main character, has grown in popularity as a way to keep making games about princesses while avoiding these criticisms.

This plot has become quite a popular target for variants and newer references to it in popular culture can be classed with Pac-Man Fever. For a similarly overused plot, see Fake King.

Named because it's often a princess. As such, a subtrope of Gratuitous Princess. For other types of stories revolving around princesses, see Princess Stories.

In the Disney Channel Original Movie Princess Protection Program, the inciting incident is Princess Rosalinda needing to be rescued after a military dictator takes over her country.