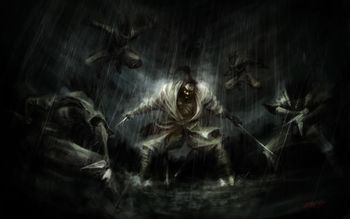 A specific trope focused on the popular concept that if samurai are present within a given story, chances are that ninjas will follow, or vice-versa.

The idea bases itself on the media's perception of the samurai and ninja of Japan holding to opposing ideals, and yet both being considered badass by the general public for their seemingly superhuman feats, skills and philosophies, even to the point of being historically inaccurate, especially in anime/manga. In Real Life, the samurai and ninja were not mutually exclusive classes; many ninjas were actually samurai themselves.

The widespread belief that ninjas were initially peasants that utilized various forms of farm equipment, as well as their knowledge of the land to combat the tyranny of oppressive samurai, is often exaggerated—though not inaccurate: after all, many historical mountain/forest communities in the Sengoku period functioned as ninja clans or armed neighborhoods

, resisting against (if not partnering with) the dominion of conquering samurai. The most notorious of these conflicts, understandably, would be Oda Nobunaga launching the Tensho Iga War

), which the ninja clans actually won during the first round. Nevertheless, there are many mythical Ninjas, most famously Ishikawa Goemon, who is said to have robbed from tyrannical ruling class to give to the poor.

Regarding this trope, usually one or the other is the protagonist while the other is the antagonist (sometimes the latter appears as an army of mooks). When the samurai is the protagonist, more often than not, s/he is a master swordsman who is either humble, or the silent type, able to slice a speeding bullet in two without even so much giving a snarl, as s/he cuts armies of ninja down with a single swipe. As a mook? Usually the samurai is just a loud, bullying dumbass with a sword... live and learn.

In contrast, the ninja protagonist is clever and capable of numerous death traps and tactics, even using occult wizardry sometimes to literally burn through the opposition. As a mook? Slithery shadow thugs who're good at killing, but terrible when facing the samurai one-on-one.

Rare, but not impossible however, is the concept of both samurai and ninja protagonists working double-team, helping each other balance out weaknesses, but usually arguing about principles and combat stratagem. Regardless, when combined, armies tend to fall faster than sakura petals in a stiff breeze.

The Mutant Lord of the Harada Clan vs. the Mutant-Hunting Leader of the Foot Clan

The Mutant Lord of the Harada Clan vs. the Mutant-Hunting Leader of the Foot Clan