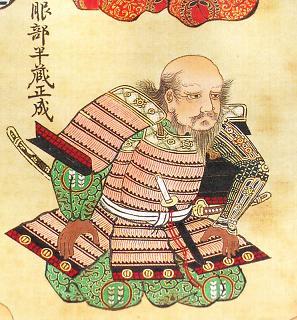 The legendary ninja? He looked like another Samurai...note Don't worry, he's just concealing his ninja status, that's what a ninja does.
Advertisement:

If Sarutobi Sasuke is the Miyamoto Musashi of ninjas, then Hattori Hanzo (服部 半蔵) was definitely the Yagyu Jubei of ninjas and the Trope Maker for Samurai Shinobi.

Put it simply, Hanzo can be considered the first Japanese ninja, although his actual profession was a front-line soldier and he preferred to ride into battle with a spear. Born Hattori Masanari, he was loyal to his lord Tokugawa Ieyasu. He made his officially debut in the battle of Anegawa, at the tender age of 16, and earned himself the nickname Oni no Hanzo.note Devil Hanzo He was a master of Iga ninjutsu, and before his official debut, he served Ieyasu under the shadows as a backup force against the Imagawa, rescuing Ieyasu's first wife and son from an Imagawa remnant right after his declaration of independence (which would prove tragic, as said son and wife ended up having being ordered to be executed because of rumors of them conspiring with the Takeda, but even then, there was a famous story about how 'Even Devils can shed tear', no wait, not that one, based on how even Hanzo, after being ordered to do so, still can't bear to shed the blood of his lord and had someone else do the job).

Later on, after the defeat at Mikatagahara, Hanzo participated in one of Ieyasu's greatest survival gambits. As the Tokugawa forces retreated to Hamamatsu, there were only five retainers left, including Ieyasu. He managed to trick the Takeda into thinking he had a trap in the castle to stop their advance, then sent Hanzo and his ninja friends to cause chaos in the Takeda camp, finally convincing Shingen that the Tokugawa definitely has a trap and they had to retreat (though in fact, they didn't).

His biggest accomplishment was during Ieyasu's perilous journey crossing the Iga village after fleeing from Akechi Mitsuhide's forces after Mitsuhide killed Oda Nobunaga. Using his ninja connections, Hanzo proceeded to secure a path for Ieyasu to arrive safely in his domain.

His cause of death is unclear. According to myth, he was lured into a naval battle against Fuuma Kotaro and died when his ship was burned down. Historical records, however, say that he died of sickness shortly before Ieyasu took control of the land. Hanzomon (literally, "Gate of Hanzo") in Tokyo is named after him and is allegedly where he is buried.

While his name isn't used as often as Sasuke's in the world of fiction, Hanzo remains a popular figurehead of Ninja these days, despite his actual profession stated above. No one seems to notice that "ninja" was actually a side job for Hanzo.