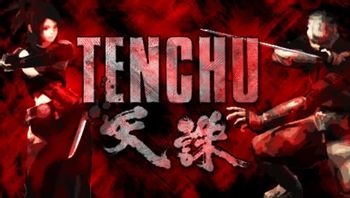 Live By Honor. Kill By Stealth.

Tenchu is a series of stealth based games originally developed by Acquire and later K2 LLC and FromSoftware that features a Ninja duo from the Azuma clan. It started in 1998 and has had several sequels across various consoles that expand its story. The story starts with a demonic sorcerer named Mei-Oh trying to take over the land of Lord Gohda whom the two ninja, Rikimaru and Ayame serve. The series is rather liked amongst those who have played it and some games contain a humorous dub version of the story that is completely different.

Stealth gameplay is the standard fare for the genre- sneaking, assassinating people while they are unaware, and so on. What sets it apart is the setting, which is feudal Japan. Tools available to the player are all stock Ninja tools, though the open nature of the levels and their multi-purpose uses means that experimentation can be both rewarding and fun. In addition, getting spotted isn't really a big deal, as the player characters can actually fight back rather well even if they're spotted. This is also one of the few games that actually somewhat discourage a Pacifist Run, with bonuses being rewarded to players that assassinate every enemy in the level. All of this comes together to form a rather arcadey stealth game, facilitated by the games multiple unlocks and short run times.

Aside from the games listed further below, the Tenchu franchise also include these titles:

Released in 1998 for PlayStation

Tenchu: Stealth Assassins is the first game in the series, focused on an apparent series of unrelated missions carried out by Rikimaru/Ayame by orders of Lord Gohda. Half-way through, Onikage makes his appearances and the protagonists are dragged into hell itself to save Gohda's daughter from Onikage's master, Lord Mei-Oh. The original Japanese version was an Obvious Beta with clunky controls and graphics, so the western version was reworked, while adding two new stages and three different selectable enemy layouts. Eventually the Japanese market got an Updated Re-release under the subtitle Shinobi Gaisen, which included all the upgrades plus a brand-new Level Editor. Later in 1999 Tenchu: Shinobi Hyakusen was released, a Japan-only Mission Pack made of 100 fan-submitted levels created with Shinobi Gaisen's Level Editor.

Birth of the Stealth Assassins

Released in 2000 for PlayStation

Tenchu 2: Birth of the Stealth Assassins is a Prequel to the first, focus on the two characters' graduation into ninjas and their first assignments serving Gohda. Introduced the Level Editor mode (originally used in Shinobi Gaisen) and the traditional third secret character.

Released in 2003 for PlayStation 2

Tenchu 3: Wrath of Heaven is a direct sequel starting where the first game left off. Each character has their own individual and independent storyline, which are quite different and contradictory between them. They all center on a new Big Bad, the dark wizard Tenrai, and his attempt to take over Gohda's land by either claiming Lord Mei-Oh's power (Rikimaru's story) or a set of three MacGuffins (Ayame's). The first entry in PlayStation 2, Wrath of Heaven refined the gameplay of the first two and introduced several new features, including a set of ninja skills to unlock, extra weapons beyond the basic ones and the ability to wield enemy weapons. It also included a set of co-op missions and a Versus Mode with several of the bosses playable. It later got a remake for Xbox titled Tenchu: Return from Darkness, with added stages and online capabilities.

Released in 2004 for PlayStation 2

Tenchu: Fatal Shadows is an Interquel set between the first and third game, focusing on Ayame's mission in enemy territory and the exploits of a former ninja, Rin, looking for the ones who burned down her secret ninja village. It's very similar gameplay-wise to Wrath of Heavens and features a few small new additions, such as enemy-based Stealth Kills.

Released in 2008 for Wii and PlayStation Portable

Tenchu: Shadow Assassins finally continued forward with the plot. Got an Unexpected Gameplay Change, with fights represented in first person.

Tenchu Z is a distant sequel set some unknown time after the other games. Rikimaru is now an NPC and your teacher, since you can create the protagonist. Only game in the series to make use of a character creation system. Also the only one where Ayame has missed the cut.