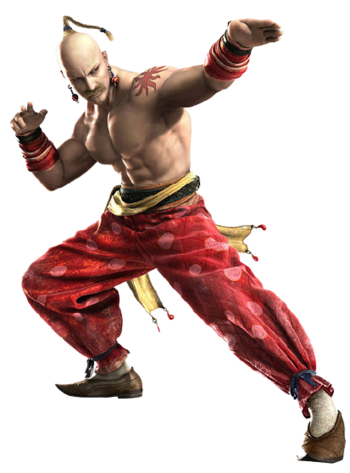 Don't let the polka-dots fool you. He's more than capable of beating you from here to Tibet and back.
"A fist... is the first and most powerful weapon that men can have in their entire lives. It is a man's soul in material form, the ultimate melee weapon!"
— Douren, Sengoku Youko Chapter 68
Advertisement:

The Bare-Fisted Monk excels in melee attacks without wielding weapons. Due to the discipline required, this is pretty much exclusively the province of Warrior Monks, sometimes, even those from Western religions. (Ironically, the monks that popular culture usually equates with bare-fisted fighting—those of the Shaolin Temple—also learn to master multiple weapons for holistic development.)

Bare Fisted Monks are often subject to a unique case of Linear Warriors, Quadratic Wizards, as they have significant inherent ability but being unable to actually use any weapon-based upgrades gives them unfortunate tendency to fall behind in the endgame. Armor restrictions are also typical. As a result, when everyone else is wielding mighty artifacts of yore, they're still throwing punches.

Of course, this is just as frequently averted, especially when Competitive Balance is a concern, typically by giving them access to specialized weapons only they may use, such as a Power Fist, which is a piece of equipment that augments unarmed attacks, letting weapons act as pure Stat Sticks, or granting the monk Next Tier Power Ups such as Ki Manipulation or Magical Martial Arts.

In either case, the monk is still extremely likely to display no visible weapons.

Subtrope of An Adventurer Is You and Weapon of Choice. Supertrope to Boxing Battler. Contrast with the Heavy Equipment Class, who are defined by the heavier weaponry they use.

Much like you can't have a Badass Normal in a world without actual superpowers, this trope is not applicable in settings where everyone fights unarmed, of course — there's nothing surprising about Rocky fighting with bare fists, since... well... that's the point. Also not to be confused with Good Old Fisticuffs, which is when someone with a complete lack of both a polished fighting technique and a weapon on hand defeats people who have one or both.

The Master's Disciples are all Buddhist Monks that happen to know kung fu.

The Master's Disciples are all Buddhist Monks that happen to know kung fu.