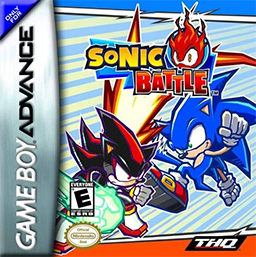 "Unknown item identified. This weapon was discovered in the ancient ruins. Identified as "Gizoid". Techniques to acquire all forms of weaponry is based on super-science technology. This process has no apparent limitations and will continue to loop indefinitely. However, in repeated experiments, the continual feed of data has caused an overload, resulting in the subject going out of control."
—The Central Lab's main computer, about Gizoid, more commonly known as "Emerl"
Advertisement:

Sonic Battle is a 2003 Fighting Game spinoff of the Sonic the Hedgehog series for the Game Boy Advance. It's connected to the Sonic Advance trilogy, Sonic Adventure 2, and Sonic Chronicles, through the story of a certain robot and its makers. Unlike most Sonic spinoff games, the focus is more on the story than gameplay.

In the beach of peaceful Emerald Town, Sonic the Hedgehog finds a worn-out robot, which talks strangely and only addresses and obeys him. Upon investigation, Sonic and company find out that this robot comes from a great civilization from the past, and that he can absorb and learn the powers and moves of the people who battle him. He feeds on Chaos Emeralds, and for each one he gets, he gets smarter and has a more defined personality, so Sonic & company Gotta Catch Them All and give them to "Emerl", as Sonic names the robot. But Dr. Eggman has plans of his own for the robot...

The gameplay is simple, yet open to wide variation. There is roaming on small, multi-tiered maps, similar to Power Stone. Each character has a basic combo, advanced directional moves, midair motion and attacks, and special moves of the Shot (projectile), Power (direct physical attack), and Set (land-mine type) classes, for both land and air. Before each respawn, you choose your land and air specials, leaving the last one to be auto-blocked if your opponent tries to hit you with that special type. While specials cost no "meter" of their own, you can charge a gauge that guarantees a One-Hit Kill for any special if it connects.

Another special part of the game is the extensive customization of Emerl. Each Skill (which is every single attack in the game, including individual parts of a combo) is represented by a Skill Card, which Emerl copies after he's witnessed it in a fight. You have to budget it, however, since each skill costs points, and you have to earn points in battle, and there is a limit to how many points there are.

Game modes include an extensive Story mode, a Challenge Mode, Vs, and several minigames themed for five of the characters.