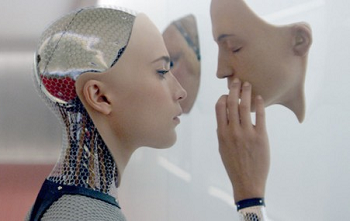 "Are you alive?"
"Ever since the first computers, there have always been ghosts in the machine. Random segments of code, that have grouped together to form unexpected protocols. Unanticipated, these free radicals engender questions of free will, creativity, and even the nature of what we might call the soul. Why is it that when some robots are left in darkness, they will seek out the light? Why is it that when robots are stored in an empty space, they will group together, rather than stand alone? How do we explain this behavior? Random segments of code? Or is it something more? When does a perceptual schematic become consciousness? When does a difference engine become the search for truth? When does a personality simulation become the bitter mote... of a soul?"
— Dr. Alfred Lanning, I, Robot
Advertisement:

Do robots have souls? Do clones? Can a computer have a sense of humor? Do Androids Dream?note and if so, do they dream of electric sheep? It has been asked in many forms, but the fundamental question is always, "What makes us human?" And is it possible for an artificial intelligence or life form to possess those same qualities? What kind of idiot would give a robot a personality, anyway?

At the lower end of the Sliding Scale of Robot Intelligence, the answer is no (your TV remote has no hopes or dreams), but at the higher end, it may become a legitimate question. How high up the scale you have to go to reach that point, and whether the answer can ever be yes, is a source of debate. The concept of the "philosophical zombie" may be mentioned — if you encountered something that gave all the outward appearance of a thinking, feeling being but had no internal consciousness such as you have, how could you tell?

When the humans in a universe (or the writers who created the universe) don't consider this trope's question or believe the answer is "no", then any AIs will end up being second-class citizens or sidekicks at best, and disposable slaves at worst. While watching such a show you may end up wondering What Measure Is a Non-Human? A world where the answer is "yes", on the other hand, may include Ridiculously Human Robots or Mechanical Lifeforms. If the humans and the AIs disagree about the answer to the question, a rebellion or Robot War may be in the cards. And if a human who does disagree in such a world changes their mind upon seeing the "death" of a Robot Buddy or other sentient robotic or artificial form, then Death Means Humanity is at play.

However, this trope is about when the intent is to make the viewers ponder these questions. In order to create tension such an attempt is usually set in a world where AIs have just been newly created or have already been relegated as sub-humans. One or more AIs will display human-like attributes and frequently one or more humans may be portrayed as amoral and overly obedient in order to further blur the line between "human" and "non-human".

In the vast majority of cases where the question is asked, the viewer will either be told outright at the end that the answer is "yes," or it will at least be strongly implied that that is the case, perhaps because getting the viewer to sympathize enough with the AIs to consider the question and then tell them that the AIs are just soulless machines after all would be considered a Downer Ending. Of course, this doesn't prevent quite a few works from doing just that, seemingly for the sake of a downer ending. Then, of course, there are those who think it's Just a Machine (or, in the case of an ambiguously Animate Inanimate Object, that it's just a Companion Cube).

Whether the answer to the trope's question is yes or no will depend largely on how much the viewer is expected to sympathize with the robot. If it's a Mecha-Mook or Mechanical Monster — whose only real purpose in the story is to give the heroes something literally mindless to fight and destroy without having to feel guilty about it — or even a full blown villain in its own right (the question of Terminators' sentience never came up until we met a friendly one), the assumption is usually that they are Just Machines and need to be stopped just as you'd need to stop or fix a runaway car or sparking electrical cable, and such robots will usually be portrayed as so obviously lacking self-awareness or personality that there may be no perceived need to even ask the question. But not always. If the robot is malevolent but is also judged to have true self-awareness, often the next question is whether it can be fixed to become good — which then raises further ethical questions about whether it's right to go mucking about with the basic essence of someone's mind, even if that someone is a machine. After all, if you wanted to give a human villain a chance to redeem himself, you'd do it by talking to him, not subjecting him to brain surgery.note Well, unless you're Doc Savage. Attempts to talk down a mad computer are likely to lead to a literal blue screen of death (which may save the heroes from having to worry about the ethics of "fixing" him because now he needs to be fixed anyway).

Another reason for a narrative's answer to be "yes" is that it can be difficult to write a character as an above-mentioned "philosophical zombie" — a hypothetical thing that can act very convincingly like a conscious being but is not actually conscious. The parser program ELIZA surprised people by doing a decent job of subverting the Turing Test all the way back in the 60s, despite being even less complex than a mid-80s Infocom game, and modern ChatBots are getting very good at cheating the test while still apparently being completely unaware of what they're talking about. Rather than honestly deal with the dilemma of something that looks, walks, and quacks like a duck but manifestly is not actually a duck, many writers will default to assuming that, yes by gosh, it's a duck. It's simply easier to write about a robot that dreams than to write about one that only claims it does.

It can also make the audience feel betrayed to make them empathize with a character, and then pull the rug out from under them and reveal that character is Just a Machine, incapable of loving or even truly being aware of itself or others. The endings of Ex Machina and Blade Runner 2049 leave it very dubious whether Ava or Joi are capable of true human feeling, despite everything we've previously seen them do. Then again, if that sense of betrayal is exactly what the writer is trying to evoke, than that's totally justified.

A robot's creator may or may not appreciate just where his creation lands on the Sliding Scale of Robot Intelligence, and even if he does realize it, he may or may not be honest about it. A businessman trying to sell robots may claim that sentient robots are nonsentient, or that nonsentient robots are sentient, depending on what he thinks his customers want to buy. A creator accused of being a Mad Scientist may claim that of course he's not trying to make a sentient machine, even if he knows perfectly well that that's what he's successfully done. Or a scientist who desperately wants to create a sentient machine may lie to himself and to others about the fact that he's failed.

And of course, it may be unclear to the creator, as well as to the audience, just how sentient the robot is; this trope is about pondering the question, not necessarily about answering it.

Generally, Mechanical Life Forms who already have a civilization and walk and talk like sentient beings at the time of First Contact are much more likely to be given the benefit of the doubt than Earthling robots who the heroes actually saw getting assembled from inanimate parts. It's somewhat rare for The Transformers to encounter anyone who seriously doubts their sentience after talking to them for more than a moment.note In-universe, they've been repeatedly proven to have souls, even before the concept of "sparks" was introduced.

Similarly, Artificial Humans and other artificial-but-still-organic beings are much more likely to be given the benefit of the doubt than inorganic ones. But not always. Per Word of God, Philip K. Dick really intended for the androids in Do Androids Dream of Electric Sheep? to be soulless (as he was obsessed with the distinction between real things and imitations), but the film adaptation Blade Runner (which Dick did in fact like) strongly implies that the answer is yes, and the sequel Blade Runner 2049 makes it extremely clear that they are full-blown people (while introducing another class of dubiously sentient artificial beings, the Jois). The question of whether animals are conscious is a natural corollary to this.

Supernatural artificial beings like golems can land anywhere on the spectrum, too. Likewise for Animate Inanimate Objects.

Despite the similarity in conclusions, because no conscious AI has actually been created so far and we humans don't actually know what makes us humans, many different criteria have been proposed as the difference between human and non-human. The ability to feel emotions (sometimes trivialized to just having a sense of humor), the ability to feel empathy for others, the ability to be "creative", or perhaps merely having free will or self-awareness (though what those two in essence are and how their existence is proven is yet another near-impossible puzzle) are just a few.

If a robot is conscious and even empathetic without necessarily thinking or acting like a human, it may be a Mechanical Animal. If it lacks human emotions but feigns them convincingly, it may be a Robotic Psychopath, at least in the literal psychological sense. Or, if it's conscious but in a deeply alien, unrelatable sort of way, it may be on its way to becoming a Mechanical Abomination (again, not that that would necessarily make it evil, just weird enough that establishing meaningful relations might very difficult).