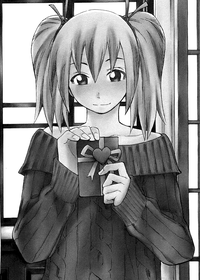 Yuri 100 Shiki is a seinen manga written by Shigemitsu Harada (who also created My Balls) and illustrated by Nobuto Hagio. It ran in Young Animal from 2006 to 2010.

Yuria is a Model 100 Dutch Wife (hence the title; 100-shiki means "type 100") — essentially, a Sex Bot. She escapes her inventor's lab (naked, of course). Shunsuke-san finds her on the street (still naked) and offers to let her stay with him for a while. She's programmed for sex, while Shunsuke is blindly dedicated to his ice-cold fiancee. Hilarity Ensues.

Yuria, being a Dutch Wife, is programmed to have sex at any opportunity. Once she does have sex (specifically, if Tab A is inserted into Slot B), she will be permanently and forever imprinted as a sex slave to the person with whom she has had sex. Problem is, she is a little more self-aware than her creator intended and is able to realize the consequences if she is imprinted, and starts to think maybe she doesn't really want that to happen. She questions her programming and eventually starts wondering if what she feels for Shunsuke is truly love, or if she is really just a preprogrammed robot after all.

Each issue is more or less a filler episode (a sexy filler episode) where Hilarity Ensues but sometimes veers back towards Yuria's confusion about life and love. Even though she reaches her conclusion that she doesn't want to be a Dutch Wife within the first few pages ("Dutch Wife!? You mean I won't be protecting the Earth or anything?") her emotional self-awareness as a person continues to grow, even though she inevitably winds up rationalizing trying to have sex with Shunsuke.

For the same basic story with a gender-swap, see Absolute Boyfriend.