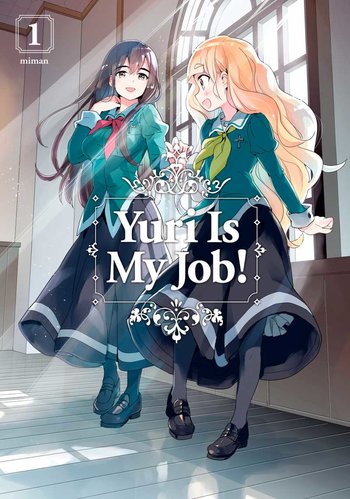 Yuri Is My Job is a yuri manga by minman, which began serialization in Comic Yuri Hime in 2016.

Hime Shiraki is an incredibly cute high school girl who has a dream - to become the Trophy Wife of a billionaire - so she keeps up a cute façade in order to appeal to everyone. Unfortunately, one day, she ends up accidentally injuring a fellow student who runs a café where the employees play students at an all-girls boarding school. In order to keep her reputation intact, Hime reluctantly agrees to take the injured student's place.

While at the cafe, Hime meets a girl named Mitsuki, who, unlike virtually everyone else Hime knows, can't stand her, and makes no secret how aggravated she is over Hime's incompetence in her role. Despite this, Hime wants to get along with Mitsuki, not knowing that she's more than just a stranger to Hime.

On May 14, 2022, it was announced the series would get an anime adaptation, and the announcement had the first trailer along with several of the voice actors. A release date has yet to be announced.