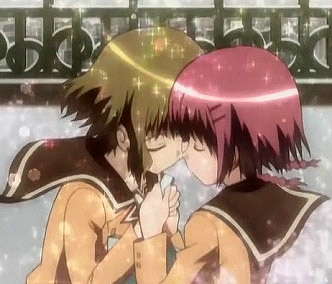 Just friends?
"It was perfectly acceptable at Baker & Inglis to get a crush on a fellow classmate. At a girls school a certain amount of emotional energy, normally expended on boys, gets redirected into friendships."
— Middlesex
Advertisement:

Friendship is a powerful thing, as we all know. Usually, though, there’s a degree of distance between friends, like physical lines they’re not willing to cross with each other. Sometimes, however, the friendship between two people can get very close indeed, as in hugging and holding hands all the time close. Perhaps they're so close that they even kiss, cuddle, finish each other's sentences, and/or platonically share a bed. Now, to an outside observer, this may look like they’ve taken the next step and become full-blown lovers, but not so! They’re still Just Friends, albeit friends who have grown so close that they’re comfortable doing things like this together without any romantic undertones, as they and their friends will tell you right out. It’s all just a sign of their adoration for each other and their deep-seated friendship. This relationship, called a romantic friendship

by the other wiki, can be done between children or adults (never between a child and adult for obvious reasons).

This sort of thing was much more common in older works but started dying off around the late 19th/early 20th centuries as values shifted when such things started being seen as more sexual and homophobia became a major phenomenon, though. it’s still around to some extent, and even making a small comeback in the forms of "bromance," Man Hugs, and Air Hugging. However, the more extreme versions, like cuddling, sharing a bed, and kissing at the most extreme are largely gone from these friendships and, in fiction, are mainly used to suggest certain homoerotic undertones that the characters may or may not be in denial about, or just to screw with the audience. Even when used without intentionally offering said undertones, it tends to make people think there's something more going on. That said, there is one demographic where such activities are still present and treated relatively innocently in media, especially in Japan: young girls. In Japan, when this happens it's known as a "class S" relationship, and they're expected to grow out of it and move on to heterosexual relationships. For similar reasons, this is also why the Gay Romantic Phase trope remains popular there, even as it has been mostly rejected by western audiences for its homophobic implications. Naturally, this also makes the subversion of this trope a popular initial setup in the Yuri Genre, as a young couple gradually realises that they're not just practicing for adulthood, but are very seriously in love.

Related to Heterosexual Life-Partners and Platonic Life-Partners. See also Gay Romantic Phase for another type of loveless, but very close, relationship, though in that case it’s explicitly meant to be temporary and simply practice for a "real" (heterosexual) relationship. If this close relationship gets sexual but remains non-romantic, then it overlaps with Friends with Benefits. Ambiguously Gay and Ambiguously Bi are sister tropes. See also Homoerotic Subtext.