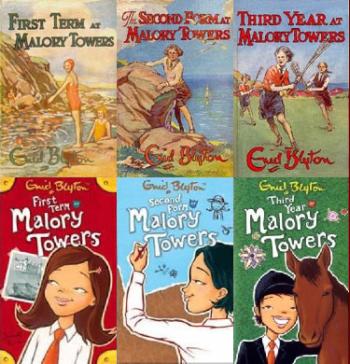 The old book covers compared to the new ones.
Malory Towers is a series of six novels by British children's author Enid Blyton, featuring the fictional Cornish seaside boarding school of the same name. Though the originals were written from 1946 to 1951, the series Outlived Its Creator - in 2009 six more books were added to the series by author Pamela Cox, who has also made additions to Blyton's series St Clare's.
Advertisement:

The characters are very similar to those in the St Clare's series.

The series is believed to be semi-autobiographical, and the name "Darrell Rivers" is clearly drawn from Blyton's second husband's name, Kenneth Darrell Waters. It is also widely supposed that Blyton based the creation on the famous Scottish boarding school St Leonards School, in St Andrews, which is, of course, the heroine’s University destination.

A lot of information on the series can be found here.