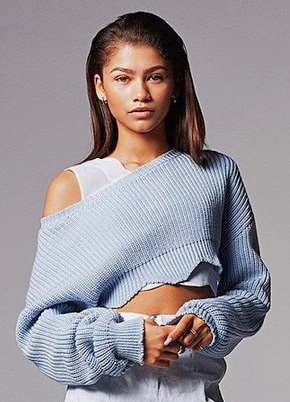 Zendaya Maree Stoermer Coleman (born September 1, 1996 in Oakland, California), better known mononymously as Zendaya, is an American actor, singer, model, and dancer. She has been performing since age six, though Shake it Up was her first show as a main character (in this case, as Raquel "Rocky" Blue).

Zendaya began her professional career working as a fashion model for Macy's, Mervyns and Old Navy. She was also featured in an iCarly toys ad along with Stefanie Scott. She also appeared as a back-up dancer in a Sears commercial featuring Disney Channel star Selena Gomez, and in 2009, she was a featured performer in the Kidz Bop music video for its cover version of the song "Hot 'n Cold". Zendaya became known for her starring role on the Disney Channel original series Shake it Up as Raquel "Rocky" Blue alongside Bella Thorne as CeCe Jones, the comedic duo trying to dance their way to stardom. She also starred in the book trailer for "From Bad To Cursed" by Katie Alender. Her first movie role was a starring role in the 2012 film, Frenemies alongside Shake it Up co-star, Bella Thorne and Stefanie Scott from A.N.T. Farm.

In August 2012, Zendaya signed with Hollywood Records. In July 2013, She released her major label debut single "Replay" and her debut album was released on September 11, 2013, through VEVO and was released physically and digitally on September 17, 2013. She was also runner-up on Season 16 of Dancing with the Stars.

Her last Disney Channel role was as the title character in the Teen Superspy action/comedy K.C. Undercover, before she launched her career in movies. She played Michelle Jones in Spider-Man: Homecoming, Spider-Man: Far From Home, and Spider-Man: No Way Home. She is also known for her role as Anne Wheeler in The Greatest Showman. She played Chani in Dune (2021), and will reprise the role in its sequels.

In 2019, she began to star in the American version of the Israeli Teen drama, Euphoria as Rue, a 17-year-old drug addict fresh from rehab with no plans to stay clean. In 2020, she won an Emmy for her performance, becoming at 24, the youngest ever to win in the Lead Actress category, and the first former Disney Channel alumnus to receive such an honor.