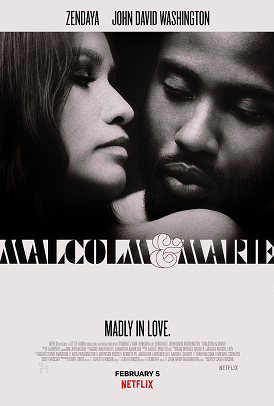 Malcolm: You know I made a mistake, so why turn it into something more?
Marie: Because it is more. [...] It's our entire fucking relationship in a nutshell.
Advertisement:

The film follows cocky, up-and-coming filmmaker Malcolm (Washington) and his morose younger girlfriend Marie (Zendaya), who have just returned home from a promising movie premiere. While Malcolm is buzzing in anticipation of the critics' reviews, he finds that Marie is upset that he did not thank or acknowledge her at the premiere. This paves the way for an at-length discussion of Malcolm's film and the filmmaking industry at large between the two, and as it heats up, long-held tensions and revelations begin to boil over and threaten their relationship.

The film was notably the first Hollywood feature written, financed and produced entirely during the COVID-19 Pandemic, with filming occurring in secret during the start of summer 2020. As a result, it largely takes place in or around a single location (the couple's home) and only focuses on its two leads.

The film got a limited release on January 29, 2021, and was released on Netflix a week later.