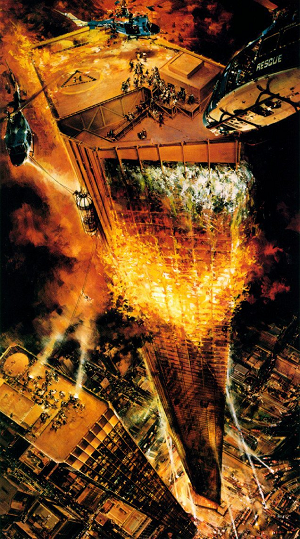 "That's it, I'm just gonna book a Motel 6 next time!"
"The whole building is a huge super-conductive antenna that was designed and built expressly for the purpose of pulling in and concentrating spiritual turbulence. Your girlfriend lives in the corner penthouse of Spook Central."
— Ray, Ghostbusters
Advertisement:

Why even bother with a City of Adventure? Sometimes, all it takes is one building to provide all the wackiness the plot requires. Besides, that way, you don't need to do any location shooting.

The Building of Adventure is frequently in the Middle-of-Nowhere Street. May be a setting in a Cozy Catastrophe.

Frequently, as in many examples below, the building will be a complex, arcology, or large structure. This still eliminates the need for location shooting and can result in very strange overuse of familiar props and scenery. Sometimes, especially when played for laughs, sections of a Building of Adventure will look nothing like other sections. However, at its most pure, this trope refers to a small, familiar set as the entire world of the story, a device often used in theatre.