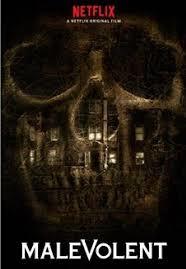 Malevolent is a 2018 Netflix original Horror film directed by Olaf de Fleur Johannesson, written by Ben Ketai and Eva Konstantopoulos (based on the novel Hush also written by Konstantopoulos), and starring Florence Pugh, Ben Lloyd-Hughes, Scott Chambers, Georgina Bevan, James Cosmo, and Celia Imrie. Angela (Pugh) and Jackson (Llyod-Hughes) are a brother and sister team in 1986 Glasgow, Scotland who run a business expelling ghosts, using their mother's legacy as a psychic to provide credibility. It's all a scam, aided by Jackson's girlfriend, Beth, and Elliot, their camera man. When Angela starts seeing and hearing things, she tries to get out of the business, but Jackson, in debt to loan sharks, insists on one last job, Mrs. Green's manor. Three foster girls were murdered at that house, reputedly by Mrs. Green's son, Herman, and Angela quickly learns that their spirits are not quiet...