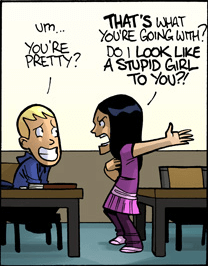 "You're a stand-up guy, Bats. Don't ever let them call you a crazed loner."
— The Flash, Justice League Unlimited
Advertisement:

There are already enough jerkasses in the world, even without tossing in things like Poor Communication Kills. On the other hand, you get the genuinely nice and well-meaning people who honestly want to compliment someone else.

It fails horribly, of course.

There may be a few reasons for this: Suppose Julie wants to compliment Alice, but goes wrong because...

Julie means well, of course. How Alice takes it, however...

Subtrope of Dismissing a Compliment. Compare Your Approval Fills Me with Shame, in which the compliment itself is fine, it's the source that's the problem. This is the inverted form of an Insult Backfire. Contrast with Backhanded Compliment, where this is done intentionally to insult someone with the pretense of complimenting them. Often the trait of the Tsundere.

Is That What You're Sayin'?!

Basically Pesto's character trait is to attack Squit whenever he says something nice about him.

Is That What You're Sayin'?!

Basically Pesto's character trait is to attack Squit whenever he says something nice about him.