Music / Rage Against the Machine 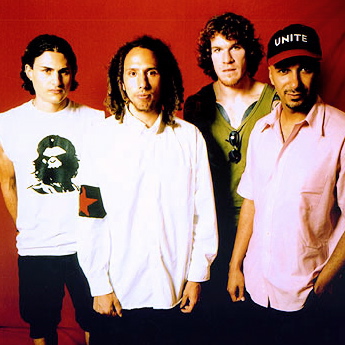 Rage Against the Machine (can be shortened to either RATM or Rage) is a Rap Metal/Funk Metal band from Los Angeles, formed in 1991.

The band is (in)famous for their extremely left-wing politics (identifying most closely with anarcho-syndicalism) and the politically-charged lyrics in their songs, and the liner notes usually include contact information to various organizations the band supports.

They have also played at large protests, and have several cases of controversial moments: when playing on Saturday Night Live (in an episode hosted by buttoned-down Republican presidential candidate Steve Forbes), they displayed the American flag upside down, until stagehands came and pulled them down. Also, when playing "Killing in the Name" at the infamous Woodstock '99, they burned the American flag onstage.

After releasing three albums during The '90s, the band went their separate ways in 2000 over Creative Differences that members believed were turning them into the exact type of unstable system that they would criticize, with the Cover Album Renegades releasing a few months after the announcement.

A seven-year hiatus followed, during which time the band members sans vocalist Zack de la Rocha formed the band Audioslave with Soundgarden vocalist Chris Cornell. News that RATM would be reuniting to play Coachella broke at the same time as Audioslave's disbandment; minus a small break in 2009, the band would continue to play live shows until they went back on hiatus in 2011.

In 2016, the band (again sans Zack) joined forces with Public Enemy's Chuck D and B-Real from Cypress Hill to form the supergroup Prophets of Ragenote Unlike the case of Audioslave, however, Prophets of Rage did play RATM songs, as well as some Cypress Hill, Public Enemy and original songs.. Its run would conclude three years later similarly to Audioslave, as it announced its disbandment very shortly after RATM confirmed that it would reunite once more for a brief tour in the spring of 2020. They are currently set to return to the stage in 2022, having postponed this tour due to COVID-19.