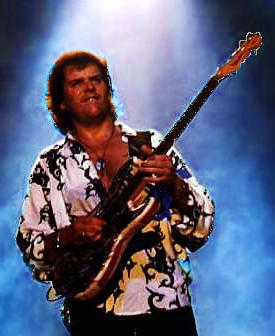 Trevor Charles Rabin (born 13 January 1954) is a South African guitarist, keyboardist, singer, and songwriter, known particularly for his work with Yes. He is known for his blend of Rock and Roll and Progressive Rock elements in his music, particularly during and after his time with Yes.

He started his career with a South African band called Rabbitt, which achieved some success locally but was virtually unknown outside of South Africa. He later moved to London to start a solo career, which achieved little commercial success but brought him recognition within professional music circles. Eventually, he met up with Ex-Yes members Alan White and Chris Squire, with whom he formed a new band called "Cinema", with Rabin on guitar and lead vocals. Fellow ex-Yes member Tony Kaye was brought in on keyboards, and Trevor Horn (another ex-Yes member) was hired to produce the album. Following Jon Anderson (yet another ex-Yes member) being brought into Cinema as vocalist, it was decided to make Cinema into a reformed Yes (against the objections of Rabin, who did not want to be seen as yet another Yes guitarist).

Despite Rabin's opposition, 90125 was released as a Yes album with songs based mostly on material Rabin had initially written for his fourth solo album. It was a major commercial and critical success, with "Owner of a Lonely Heart" becoming Yes' one and only #1-charting single. After this sudden success, Creative Differences began to emerge in the new Yes, with Trevor Horn leaving before the release of the follow-up album Big Generator (leaving Rabin to do much of the production work himself) and Jon Anderson leaving shortly after its release. Rabin was thus left as the frontman of a highly fragmented Yes. While working with Squire and White on material for the new Yes album, Rabin recorded and toured a fourth solo album Can't Look Away that was well-received critically but was a disappointment commercially.

After contributing a trio of tracks to the Yes album Union (incorporating the splinter group Anderson Bruford Wakeman Howe), Rabin took charge of the Yes album Talk in 1994. Written mostly by Rabin and produced entirely by him, Talk was unmitigated failure commercially due to the record label going bankrupt and doing little to no promotion of it. Rabin, disappointed at putting so much time and effort into a project that he felt was unappreciated, left Yes to pursue a career composing film scores, which he has been doing for most of the time since (barring the odd solo album).

However, he's been on hiatus from film scoring since 2016 due to a new project: In 2010, Rabin, Jon Anderson and Rick Wakeman formed Anderson, Rabin & Wakeman to tour and play Yes material. After they and their former Yes bandmates were inducted into the Rock & Roll Hall of Fame in 2017, they rebranded themselves as "Yes featuring ARW". They have a studio album due for early 2019, having already released a live album in 2018.

Selected film scores note Only works with pages on this wiki are included; he has forty-four credits on Wikipedia