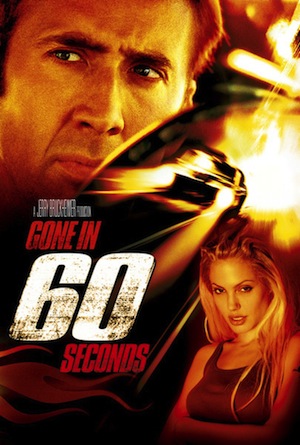 Gone in 60 Seconds is a 2000 action film starring Nicolas Cage, directed by Dominic Sena, and written by Scott Rosenberg. It was produced by Jerry Bruckheimer, producer of The Rock and Armageddon, and is a remake of the 1974 H.B. Halicki film of the same name.

The film was shot in Hamilton, Ontario, Canada and throughout Los Angeles and Long Beach.

The film concerns "Memphis" Raines (Nicolas Cage), a former master car thief forced to return to his former trade and steal fifty specified cars for crime boss Raymond Vincent Calitri (Christopher Eccleston), who is threatening to kill Memphis' brother, Kip (Giovanni Ribisi), because Kip had taken a contract but failed to fulfill it (a stolen Porsche Carrera was chased to Kip's warehouse and the collected cars were impounded).

Memphis now has to fulfill the contract and so reassembles his old crew, also joined by Kip's crew.

With Detective Castlebeck (Delroy Lindo) and his partner, Det. Drycoff (Timothy Olyphant) breathing down their necks, they decide to steal all the cars in one night, to reduce the chances of being caught. Also, in case the police are monitoring their communications, all of the cars they are stealing have female code names. The most famous one in the story is the 1968 Mustang, which is nicknamed "Eleanor."

But, the police already know about the boost and, after cracking an employee at the Mercedes dealership, who had earlier supplied Kip's crew with the special laser cut keys for a Mercedes, set a trap to catch them in action. It thus turns out to be a high action drama of a very long night.