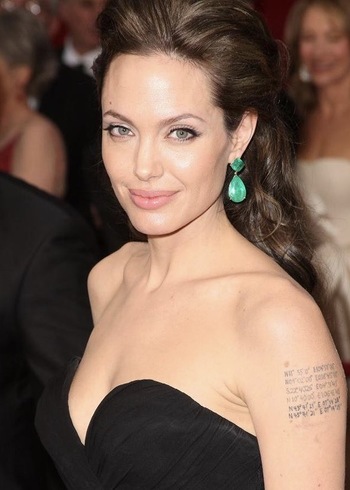 "If I make a fool of myself, who cares? I'm not frightened by anyone's perception of me."
Advertisement:

Angelina Jolie, DCMG (born Angelina Jolie Voight; June 4, 1975) is an American actress and director. She is the daughter of actors Jon Voight and Marcheline Bertrand.

Jolie has received numerous accolades for her film work, including an Academy Award, two Screen Actors Guild Awards, and three Golden Globe Awards. Outside of Hollywood, she has promoted humanitarian causes throughout the world, and is noted for her work as a Goodwill Ambassador for the United Nations Refugee Agency (UNHCR)* United Nations High Commissioner for Refugees. She has often been cited as one of the world's most beautiful women and her off-screen life is widely reported on. Divorced from actors Jonny Lee Miller and Billy Bob Thornton, she entered a high-profile relationship with Brad Pitt in 2005. The couple married in 2014, but Jolie filed for a divorce in 2016. She and Pitt have six children: Maddox, Zahara, Pax, Shiloh, Knox and Vivienne (three biological, three adopted). She has multiple tattoos, several of which she has had removed or covered over the years, most notably her "Billy Bob" and dragon tattoos. She has also been very open and honest about her "wild child" past and her bisexuality.

She is known for her varied roles (though she does tend to be cast as strong female characters, usually Action Girls) and her critically acclaimed acting, including earning Oscar nominations for her roles in Girl, Interrupted and Changeling. Unfortunately, her incredible acting skills and charity work tend to be overshadowed by (usually false and malicious) rumours, her personal life, her estrangement from her father (they couldn't be more different politically), and, more recently, her relationship with fellow actor Brad Pitt, whom she separated from in 2016. Her career started off very quietly, with a lot of independent movies and low-popularity fare (which featured a ton of nudity and a lot of Wild Child-type parts), before a big break in Girl, Interrupted earned her the Best Supporting Actress Oscar and mainstream credibility. Unlike many female actors, she continued to do nude work well after she hit big.

In 2011, she made her directorial debut with In the Land of Blood and Honey, a low-key drama about the Bosnian War. In 2014, she directed the World War II film Unbroken. Her fourth film, First They Killed My Father, was nominated for a Golden Globe Award for Foreign Language Film in 2018.

She has become highly active in efforts to end sexual violence in conflict, heading up a major summit on the issue held in London.