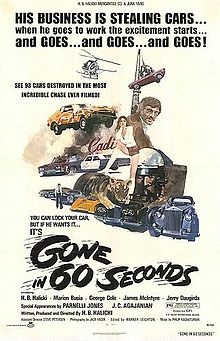 Chace Research insurance investigator Maindrian Pace and his team lead a double life as expert car thieves. When a Colombian drug lord contracts him to steal 48 cars in a week for $400,000, he has secured all but one, a 1971 Mustang Mach I, codenamed Eleanor. After destroying a 1972 Cadillac Fleetwood Eldorado because it was owned by a drug trafficker (and packed to the brim with heroin), Eugene Chace, his business partner/brother-in-law, tips off the police to stakeout the International Tower in Long Beach, location of the final Mustang.

Made by H. B. "Toby" Halicki, known as The Shoestring Salesman (who did all of his own stunts) on a budget of almost nothing. Has a remake starring Angelina Jolie and Nicolas Cage.

Gone in 60 Seconds shows examples of the following tropes: