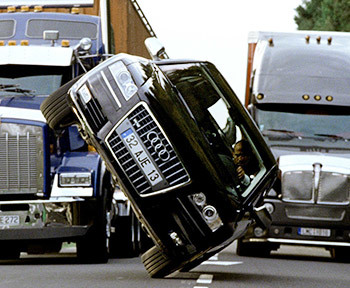 Don't Try This at Home. Or anywhere, really.
Advertisement:

Most people drive cars. Many are competent. A few are exceptionally skilled. And a minuscule fraction can do things behind the wheel that'd make your head spin faster than the driveshaft. These gods among wheelmen are a marvel to behold, with skill, timing, or luck so solid they can start and stop on farthings, drive through your coat closet without scuffing the drywall, pivot in place, or power-slide round entire municipalities. Such beings will often possess Machine Empathy, detecting when something's wrong due to subtle changes in how their vehicle is acting.

The natural habitats of the Badass Driver include tracks, car chases, and anywhere where something with wheels is trying to be faster than something else. Often seen behind the wheel of the Cool Car.

Compare Improbable Piloting Skills for the Badass Drivers of the skies and Badass Biker for Badass Drivers on two wheels. See also Drives Like Crazy, which is often either this or its exact opposite. See also Graceful in Their Element for when they're clumsy outside of a car.

If they're part of a gang, expect them to be the Getaway Driver. Their counterpart in the sky is the Ace Pilot.

Daniel Morales showcasing his skills as the Fastest Taxi Driver in all of Marseille, France with his souped up Peugeot 406 V6.

Daniel Morales showcasing his skills as the Fastest Taxi Driver in all of Marseille, France with his souped up Peugeot 406 V6.