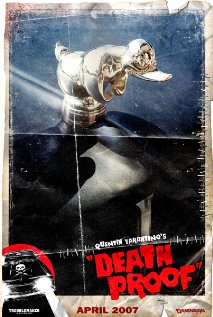 Death Proof, the more dialogue-oriented half of Grindhouse, is a Quentin Tarantino film in which an aging stuntman uses his souped-up stuntcar to kill women on the open road. Little does he realize that a few of his second bunch of victims are stuntwomen... and among them is Zoë Bell (playing herself), who also doubled for Uma Thurman in Kill Bill and Mélanie Laurent in Inglourious Basterds in real life. Boy, is Stuntman Mike in for a world of hurt...

The German release ended up being the final wide release movie for the ill-fated HD DVD format ever, (the final ever release was Deadlands 2: Trapped, at a 500 copy run.)

These eight women are about to meet one diabolical trope: