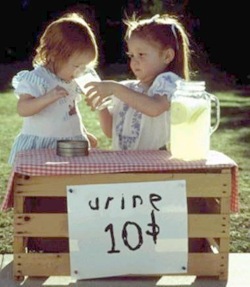 Honesty Is the Best Policy...
"What the—?! This is lemonade! Where's my culture of ameobic dysentery?"
— Scientist (at the same time another scientist is drinking something out of a similar looking glass), The Far Side

This trope covers instances when a character eats or drinks something that's not intended to be food. Most of the time, the character is not aware of what they're consuming; typically results in a Spit Take, Vomit Discretion Shot (or not), or some other response once the discovery is made.

Inevitably produces lots of squick and Nausea Fuel. Might lead to It Tastes Like Feet when the dust settles. Often played for laughs as a form of Vulgar Humor. A common lead-up is to have the unfortunate consumer use Sommelier Speak to describe the supposedly rich and complex flavor before being told that what was consumed was not the delicacy they originally thought it was.

Differs from Foreign Queasine, Reduced to Ratburgers, and Alien Lunch in that the stuff eaten wasn't supposed to be eaten by anyone, even in desperation. Bob drinking Rigelian bloodwine ("a delicacy on my planet!") is not this trope, but Bob drinking Rigelian rocket fuel is. Similar to Mystery Meat where a random meat-like byproduct is the unfood in question.

Compare Eat That, Secret Ingredient. Contrast with Bizarre Taste in Food, Gargle Blaster, Masochist's Meal, Fire-Breathing Diner, and Even the Rats Won't Touch It. Also see Cordon Bleugh Chef, Lethal Chef and Evil Chef, three people who may be involved with this trope. Cool, Clear Water might be subverted for the drink-based version of this trope. Subtropes include You're Drinking Breast Milk, Eating Pet Food, Revenge Is a Dish Best Served, The Secret of Long Pork Pies, Pooping Food and Stock "Yuck!". The darkest possible variation is Familial Cannibalism Surprise.

Note: If it's human flesh being eaten, then the trope is I'm a Humanitarian, To Serve Man, or The Secret of Long Pork Pies.

A step left out of this, but in the original book, feeding spiders to sparrows, then eating those. And Seward mentions he's repeatedly turned down Renfield's request for a pet cat.

Alternative Title(s): I Drank What