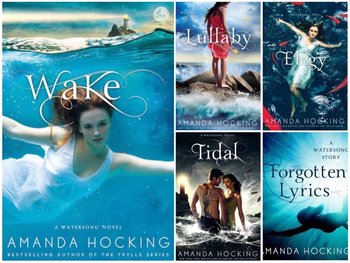 Come now, weary traveler
I'll lead you through the waves.
Worry not, poor voyager,
For my voice is the way.
Lyrics to the Watersong
Advertisement:

Sisters Gemma and Harper Fisher live in the seaside town of Anthemusa bay. The two girls lead ordinary lives: Gemma competes on the school swim team, and Harper is preparing to go to college. But everything changes for them when three new girls come to town.

Penn, Lexi, and Thea are gorgeous and charismatic — supernaturally so. They aren't human, they're sirens from Greek Mythology — and they've come to transform Gemma into one of them, whether she likes it or not. Gemma and Harper must find a way to break the curse and restore Gemma's humanity before it's too late and she becomes a monster forever.

The series consists of Wake, Lullaby, Tidal, and Elegy.