Comic Strip / The Wizard of Id 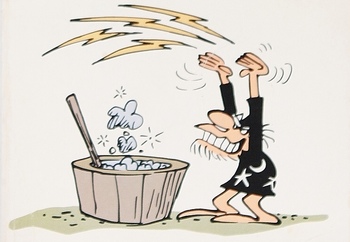 The Wizard of Id is a daily newspaper comic strip created by American cartoonists Johnny Hart (B.C.) and Brant Parker. Launched in 1964, the strip follows the antics of a large cast of characters in a shabby medieval kingdom called "Id". From time to time, the King refers to his subjects as "Idiots". The title is a play on The Wizard of Oz, combined with the Freudian psychological term Id, which represents the instinctive and primal part of the human psyche.

The Wizard of Id deals with the goings-on of the run-down and oppressed mythical kingdom of Id. It follows people from all corners of the kingdom, but concentrates on the court of a tyrannical dwarfish monarch known only as "the King". The cast is large for a daily cartoon strip, and there are recurring jokes for a variety of continuing characters and for the kingdom itself.

While it's set a thousand years ago, the strip's humor occasionally satirizes modern American culture, and deliberate anachronisms are rampant. Technology changes to suit whatever a gag requires; a battle with spears and arrows might be followed by a peasant using an ATM. The general trend is that even though the personalities of the characters are well known, their surroundings will morph to allow a good joke. For instance, in some strips the King is curiously elected to his monarchial position (albeit through rigged ballots), no thanks to the Duke suggesting while drunk the first time it happened that they hold an election which became an annual event. The aspects that stay the same, however, are that Id is in the middle of nowhere, home to a large castle surrounded by a moat. The King and his subjects run an inept army perpetually at war with "the Huns", while the unhappy, overtaxed peasants (or Idiots) make little money as farmers and stablehands to keep modest lifestyles.

Brant handed art duties over to his son Jeff Parker in 1997. When Hart died a decade later, his grandson Mason Mastroianni took over both Wizard of Id and Hart's other strip, B.C., although unlike on B.C., he only handled writing duties until Jeff Parker exited the strip in 2015.

The strip contains examples of: