Film / They Were Expendable 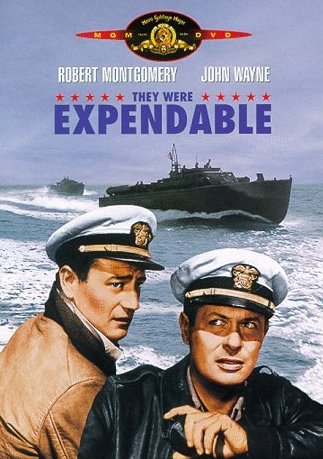 They Were Expendable is a 1945 war film directed by John Ford. Filmed just weeks after the end of the war, it tells a fictionalized version of the story of US Navy Motor Torpedo Boat Squadron 3 in the Philippines in the early months of World War II. The movie stars Robert Montgomery as the Squadron’s commander, Lieutenant John “Brick” Brickley, John Wayne as his executive officer, Lieutenant JG Rusty Ryan, and Ward Bond as Chief Bosun’s Mate “Boats” Mulcahey.

The story begins at Cavite Naval Station late on the evening of December 7th, 1941 (across the International Date Line from Hawaii and the continental United States). MTBron-3 is throwing a retirement party for Doc, the squadron’s Chief Pharmacist’s Mate, when the attack on Pearl Harbor is announced shortly after midnight.

The following morning, the PT Boat squadron is awaiting orders to sortie when Japanese bombers hit Cavite. Despite Brickley’s protests, the Asiatic Fleet only wants to use the PTs as courier speedboats around Manila Bay.

They are soon forced to evacuate from Cavite to the Bataan Peninsula, where Brick is finally able to convince his superiors to give them a handful of combat missions, which meet with mixed results. Meanwhile, Rusty strikes up a romance with Army nurse Sandy Davyss (Donna Reed). As the situation deteriorates, Brickley is ordered to take his four remaining operational boats and evacuate General MacArthur and his family and staff from Corregidor to the southern island of Mindanao. With the limited space on the boats, the rest of the crews have to be left behind, and are assembled into a scratch infantry platoon to assist the Soldiers and Marines on the line.

Brick and Rusty reach Mindanao, but lose a boat on the way. Another breaks down and has to be towed in. With the MacArthurs safely delivered, Brickley learns of a Japanese cruiser in the vicinity and decides to use their last torpedoes in an attempt to sink it. The attack is successful, but Rusty’s boat is badly damaged and has to be beached. He gets his crew off moments before the boat is destroyed by Japanese bombers. Rusty and his crew soon reunite with Brick and his, but find that the Army, which is preparing for a guerilla campaign, has commandeered Brick’s boat, which is out of torpedoes, for use on an inland lake. They can’t find their third crew.

The local Army commander notifies Brickley that he, Ryan, and two of their junior officers have been ordered to fly home to train new PT crews. Their men will have to stay on Mindanao and join the Army’s guerilla war. Rusty tries to stay with the men, but Brick orders him to get on the plane. The movie ends with Chief Mulcahey marching the remaining PT Sailors alongside an Army column.

They Were Expendable contains examples of: