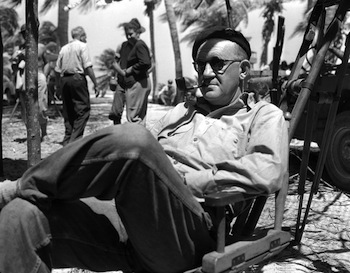 "My name's John Ford. I make Westerns."
"I prefer the old masters, by which I mean: John Ford, John Ford and John Ford."
— Orson Welles, when asked who the three greatest American directors of all time were.
Advertisement:

John Ford (born John Martin Feeney; February 1, 1894 – August 31, 1973) was an American director whose lengthy career was one of the most honored in Hollywood history. Four Oscars for Best Director, which is still the record. Filmed some of the most iconic Wild West and war movies of the age.

Born in Maine to a large Irish family, he traveled with his older brother Francis to Hollywood during the early years of film-making. Changing their last names to Ford, Francis went to work as an actor while John found himself finding work behind the camera. By the 1920s and 1930s, John Ford was working on small-time, quickly made Westerners but was moving on to bigger and better projects. He won his first Best Director Oscar for The Informer, a political thriller about the IRA which cemented his reputation as a great director. Then in 1939 he directed Stagecoach, considered for decades to be the greatest Western ever made. He went on to win three more Best Director Oscars, more than any other film-maker. (Although, ironically, none of them were for the westerns he was so well-known for. This is understandable since it would take 'till the '90s for Westerns to get Out of the Ghetto and be taken seriously as dramatic works.)

In his lifetime, Ford was regarded almost unanimously as America's greatest film-maker, with all his contemporaries having nothing but respect and admiration for him. He also had an international following such respectable film-makers as Akira Kurosawa, Ingmar Bergman, Jean Renoir and even outsider film-makers like Jean-Luc Godard admitting to his importance and influence. As one of the founders of the DGA, Ford also encouraged young film-makers, serving as The Mentor to the likes of Orson Welles, Elia Kazan, Samuel Fuller and many others. A 13-year-old aspiring filmmaker named Steven Spielberg briefly met Ford, who gave him some advice on the value of good shot composition.

In The '60s and The '70s, Ford's films fell under scrutiny on issues of representation of Native Americans and African Americans in his Westerns and dramas. The fact that many of them featured John Wayne, a prominent supporter of The Vietnam War and other conservative causes didn't help. In matter of fact, for most of his life, Ford was a liberal. A supporter of Franklin Roosevelt and Kennedy, who personally opposed the Red Scare, publicly denounced pro-blacklist filmmaker Cecil B. DeMille at a meeting of the Director's Guild and helped blacklisted actors and writers find work. Later in life however, Ford identified himself as a "Maine Republican" and supported both Dwight Eisenhower and Richard Nixon. He was also highly intelligent, speaking several languages including the Navajo language.

Ford's Westerns were largely set in Monument Valley Utah and he used the Navajo tribe in the region as extras which he cast in all his westerns. Ford's films aided the economy for the Navajos and he paid them fair wages on union scale in a time of segregation. For this the Navajos gave him the honorific Natani Nez. Ford's films like Fort Apache and The Searchers highlighted the injustice and violence of the landscape, with the latter film even subverting John Wayne's image as The Hero, even addressing the hypocrisy of Missing White Woman Syndrome years before his time. His final western, Cheyenne Autumn, also subverted the genre and addressed the Old Shame of Native American oppression in a way few Westerns did. Ford passed away in 1973.

No relation to the acclaimed writer John M. Ford.

There are several excellent biographies of Ford available, including grandson Dan Ford's Pappy: The Life of John Ford; Joseph McBride's Searching for John Ford; Scott Eyman's Print the Legend; and Peter Bogdanovich's John Ford and John Ford: The Man and His Films by Tag Gallagher. Bogdanovich also produced a feature-length documentary, Directed by John Ford, featuring interviews with Ford and many of his collaborators.