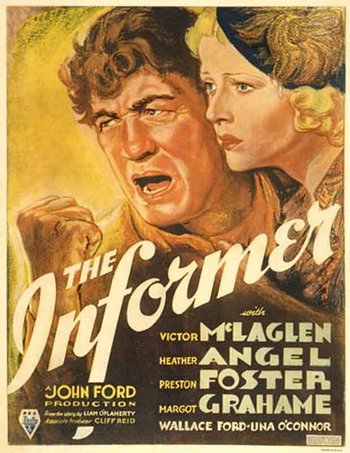 The Informer is a 1935 film directed by John Ford, starring Victor McLaglen.

The film is set in Dublin during The Irish Revolution. Gypo McLaglen is a former IRA soldier who was drummed out for having mercy and allowing a prisoner to escape. He is desperately poor and somewhat bitter at his comrades for casting him aside. His girlfriend Katie is a prostitute who mocks Gypo for his poverty when Gypo takes exception to a john trying to pick up Katie on the street. Right after this, Gypo runs into Frankie McPhillip, an old IRA comrade who is a fugitive from the British but has snuck back into town to visit his family. There is a £20 price on Frankie's head, which coincidentally is exactly the price of passage for Gypo and Katie to America. Gypo tells the British paramilitary police, the Black and Tans

where Frankie is in exchange for the reward. Tragedy ensues.

The Informer lost the Best Picture Oscar to Mutiny on the Bounty but won most of the other prizes, including director for Ford, actor for McLaglen, and screenplay for Dudley Nichols. Nichols turned down his award due to labor disagreements; this was the first time an Oscar was ever refused.