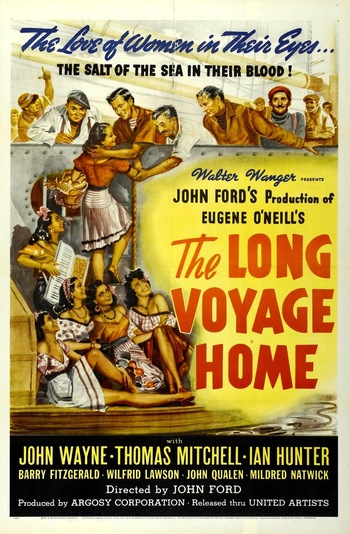 The Long Voyage Home is a 1940 film directed by John Ford, starring John Wayne, Thomas Mitchell, and Ian Hunter. It tells the story of a merchant ship on the high seas during World War II.

The SS Glencairn is a British cargo ship in port in the West Indies in the spring of 1940. The men complain about lack of shore leave, but they soon find out that they will have to carry a cargo of ammunition from Baltimore to London, right through the German war zone. Ole (Wayne) is a Swedish sailor who wants nothing more than to take his wages, go home to Sweden, and see his mother again. Smitty (Hunter) is an Englishman who has some kind of dark secret. Driscoll (Mitchell) is an old salt who is determined that Ole will in fact go home, rather than blowing his money on drink once they reach port. But before Ole can go home, they have to make a highly dangerous voyage through waters being patrolled by the German Kriegsmarine and Luftwaffe.

Screenwriter Dudley Nichols adapted the film from four one-act plays by Eugene O'Neill, with a Setting Update from World War I to World War II.